The latest from the Pomerium ensemble (and a recording paid for by crowd sourcing!) very appropriately gives us Music for the Tudor Queens.

NOTE: As we come to the end of the celebrations for the Bard’s 450th year, we hear a new release of the recording Music for the Tudor Queens with the Pomerium Ensemble directed by Alexander Blachly. It is on the Old Hall label and is CD OHR003. For more information:

Queen Mary Tudor, daughter of Henry VIII and Catherine of Aragon, ruled England for only five years, but they were good years for music. Mary’s first priority was the restoration of the Catholic Church, recently outlawed by her father and younger brother in favor of the new Church of England. Considering music to be an important part of the restoration, Mary encouraged composers to write elaborate sacred music similar in style to the monumental English works from the late 15th and early 16th centuries—works as different as possible from the simplified music for the Church of England composed in the years immediately preceding her reign. Upon Mary’s death, Queen Elizabeth I ascended the throne. She, like Mary, was a fine musician, much enamored of the sacred works by Tallis, White, and the young William Byrd. As a Protestant, she officially catered to the Protestant ethic of uncomplicated music for churches throughout the realm, but for her private enjoyment she commissioned Latin works in a far richer style. 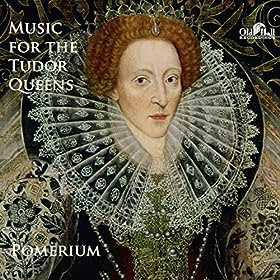