You are here: Home / Playlists / Suzi Digby and Ora

For 25 years Suzi Digby has been a champion of choral artistry for young people, from schools, with the Voices Foundation, to the London Youth Choir. Now, with Ora, she celebrates music old and new; Suzi joins us this week.

NOTE: The remarkable Suzi Digby is our guest for this program: 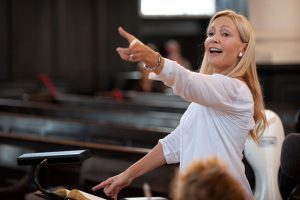 Suzi Digby OBE was born in Japan and lived in Hong Kong, Mexico and the Philippines before settling in London & Cambridge. She is an internationally renowned Choral Conductor and Music Educator. She has trailblazed the revival of singing in UK schools and the community over two and a half decades. Suzi founded and runs the following influential National arts/education organisations: The Voices Foundation (the UK’s leading Primary Music Education Charity); Voce Chamber Choir (one of London’s finest young Chamber Choirs); Vocal Futures (Nurturing young [16-22] audiences for Classical Music); Singing4Success (Leadership and ‘Accelerated Learning’ for Corporates) and The London Youth Choir (a pyramid of 5 choirs, 8-22, serving all ethnic communities in London’s 33 boroughs). February 2016 saw the public launch of her professional vocal consort, ORA (commissioning international choral works as ‘reflections’ of Renaissance masterworks). ORA’s debut album came in top of the new entries Classical Music charts in the UK and the second album is released this month on the Harmonia Mundi label.

This year she received an honorary degree from University of Aberdeen.

Suzi is a visiting Professor at University of Southern California (Choral Studies).

In 2014, she launched one of the finest professional consorts in California, ‘The Golden Bridge’, which commissions Californian composers to reflect masterpieces of the English ‘Golden’ Tudor Age and of the European Renaissance.

Following the stunning success of their best-selling debut, Suzi Digby’s crack vocal ensemble ORA presents their new album: ‘Refuge from the Flames’. Dedicated to the legacy of Girolamo Savonarola, 15th century Dominican and religious reformer, this new CD further showcases ORA's commitment to bringing together Renaissance choral masterpieces and commissioned reflections from contemporary composers. ORA bring a wealth of experience that gilds these pieces, both new and old, into the lustrous works of art they truly are.

“We begin and end this second ORA album with two contrasting settings of the Miserere mei (Psalm 50, Vulgate). Over the centuries this text has inspired reflections by many Christian writers, none more influential than those by Girolamo Savonarola, and we have devoted much of this album to his extraordinary legacy. Central to the recording is Savonarola’s meditation on the psalm, 'Infelix Ego', written shortly before his execution. We present it here in William Byrd’s justly famous setting, and in a newly commissioned masterpiece by the Latvian composer Eriks Ešenvalds.” Suzi Digby OBE [artistic director & conductor].

Launched at the Cutty Sark in Greenwich, and with an appearance on In Tune, earlier this year, ORA'S third album for harmonia mundi pays tribute to the particular golden age of Thomas Tallis.

"The opening years of the 21st century can justifiably lay claim to being a new golden age for choral music. I wanted to embark on a series of recordings to reflect this and to showcase some of today’s best contemporary composers, placing their works in direct relief with masterpieces from previous ages. This recording, the second in our ‘Renaissance gems and their reflections’ series, looks at the music of Thomas Tallis, and we are delighted to have commissioned a number of talented composers to offer their personal reflections on his works. I hope that these new pieces, like Tallis’ originals, will find their way into the repertoire of other vocal groups, delighting audiences both now and in the future." Suzi Digby OBE