You are here: Home / Playlists / The English Consort, Part 2

The prolific Phantasm Ensemble gives us anthems by Tomkins, consorts by John Jenkins, and a new recording of the complete consort music by Christopher Tye.

The English composer is especially bold in his metrical and harmonic experiments embraced within his mystical but surprisingly approachable instrumental works.

There are pieces depicting the biblical Rachel weeping for her children, an In Nomine counted in lengths of five beats (unheard of before the nineteenth century) and obsessional works – such as Sit fast – which test the rhythmic skills of musicians with passages of dizzyingly modernist metrical complexity.

Phantasm take a radically different approach to previous recordings, delivering a performance that brings out the music’s ceaseless energy, rhythmic articulation, and provocative harmonies – in short, one that highlights Tye’s insights as music for today.

From Gramophone: A contemporary of Tallis and Sheppard, Christopher Tye was a composer apart. His ear for harmony, his eye for a musical line, seem to have been guided by a different logic to those around him. There’s no doubting his architect’s instinct for musical form but his architecture is more Frank Gehry than Inigo Jones – wilful, playful, iconoclastic and often as baffling as it is beautiful. This collection of his complete consort music throws up surprise after surprise – a revelation of a recording that offers a startling perspective on a familiar musical landscape.

Other recordings of this music do exist – notably Fretwork’s ‘In nomine’ (Amon Ra, 3/88) and the rather lovely ‘Crye’ by Concordia Viols (Metronome, 12/97) – often pairing Tye’s works for viol consort with those of Taverner, Tallis and Byrd. But to hear these pieces back to back, one after another as here, is to really get inside this extraordinary imagination, to be caught up short by musical blind alleys and hairpin bends of a composer who not only invented the characteristically English genre of the In nomine but who also took it further than almost any of his later imitators.

Phantasm’s craggy, deep-dug performances follow the composer’s instructive titles – ‘Hold fast’, ‘Follow me’, ‘Believe me’ – to the letter, gamely celebrating the oddities as well as the felicities of works whose fixation with 54 notes of plainchant by John Taverner (taken from the Benedictus of his Missa Gloria tibi Trinitas) has never fully been explained. Discovering the unexpected sensuality of the In nomine ‘Round’, the yelping, insistent plaints of the In nomine ‘Cry’ and the provocative dramatics of the In nomine ‘Re la re’, Phantasm are skilled musical tour guides to Tye’s challenging terrain.

In nomine 'Free from all'

In nomine 'Weep no more, Rachel'

In nomine 'Say so'

In nomine 'Re la re'

In nomine 'Believe me'

In nomine 'I come'

In nomine 'My death bed'

In nomine 'Farewell my good one forever'

The renowned Choir of Magdalen College, Oxford, joined here by former Magdalen College viol consort-in-residence Phantasm, showcase the amazing breadth and diversity of this masterly voice in English composition. Five verse anthems, jewels in Tomkins’s choral output, have come down to us with ensemble accompaniment, allowing choir and consort to combine forces as it’s likely they once did in the Elizabethan Chapel Royal. Phantasm also perform some of Tomkins’s most striking works for three to six viols, revealing the composer’s very personal approach to the consort style.
From Amazon.com: Daniel Hyde and the Choir of Magdalen College, Oxford, along with the early music ensemble Phantasm, present an interesting program of music by Thomas Tomkins.

Five anthems for choir and viols (as opposed to just an organ) are the showpieces here, and rightly so. Tomkins' use of the consort is more imaginative than just simply mimicking keyboard accompaniment.

Tomkins adds and subtracts instruments to subtly shade the ensemble sound as it sometimes supports and sometimes plays in opposition to the choir. Also included are various consort works, showing Tomkins' consummate skill at instrumental composition.

The Choir of Magdalen College sings in a straightforward fashion. The soloists have a rough quality to their delivery, which sounds completely authentic to me. Phantasm plays with precision and authority. Viols tend to have a wispy sound (compared to modern stringed instruments), but there's nothing anemic about Phantasm.

That solid instrumental work coupled with the not-quite-polished sound of the choir really brings these works to life. These gritty performances have a beauty all their own and that earthy beauty I found thoroughly appealing. 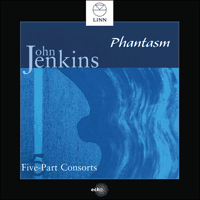 From AllMusic.com: It is hard to imagine how English string consort Phantasm could improve on its prior release, the excellent Avie disc Four Temperaments. Perhaps Phantasm also realized this, for the follow-up, John Jenkins: Five-Part Consorts, represents a slight shift of gears in approach from Four Temperaments and yet manages to continue the thread of historic argument begun with the earlier album. Whereas Four Temperaments focused on four composers from the time of William Byrd, including Byrd himself, John Jenkins comes from a slightly later phase in the development of English consort music. Regarded as a major figure in his own time, greater appreciation of Jenkins' strengths as a composer have been hindered to some extent by the sheer bulk of his surviving output of more than 800 pieces. While certain works of Jenkins are popular with string consort groups and often anthologized, whole discs devoted to his output remain relatively rare. One can find no evidence that any of the five-part consorts featured here have been recorded before -- ever.

Phantasm is firing on all cylinders for every note of the 20 works included and the recording is excellent, capturing all of the subtle intricacies produced by the five instruments; to cover Jenkins' fifth part, guest tenor violist Mikko Perkola is added to the mix. Phantasm achieves a full, rich texture and at times almost choral sense of fluidity; for example, check out the Pavan 3 in F that concludes the program. While the disc has a generally appealing sound and will provide great, relaxing background music for weary ears -- these pieces, after all, were written to entertain private citizens who enjoyed comfortable incomes -- repeated listening reveals the depth of complexity of Jenkins' textures and his probative and greatly variable approach to evoking certain emotional states as well. Phantasm's John Jenkins: Five-Part Consorts is not something that one will buy, play a couple of times, and then forget about forever; it is designed for the long haul, and chances are that listeners will still find revelatory details in it 30 years down the line. While not as urgently recommended to fanciers of English consort music as Phantasm's Four Temperaments would be, John Jenkins: Five-Part Consorts is a very, very strong entry -- if they continue in this historical direction, hopefully Phantasm will run into Matthew Locke.