You are here: Home / Playlists / The Medieval Melange

Three recordings looking at the crossroads of music and trade between Europe and Islamic countries.

From Robert Staak: It is extremely difficult to draw a line between traditional music and early music. Both of them have similar melodies, intonations and they sound alike, additionally even the instruments are similar. It is often quite impossible to differentiate between them. This may be one of the reasons why early music, traditional music and oriental music have become widely popular and their performers so professional in the last fifty years. All of them enchant us with their centuries-old values that for a long time people didn’t appreciate, but now suddenly feel joy in rediscovering them. Music such as this is characterized by ancient spirituality and religiosity − qualities that many people miss nowadays.

Medieval music often surprises us with its oriental sounds. The East was a greater influence to Europe in the Middle Ages than it is often realised. The Moors ruled the Iberian peninsula for almost 800 years. The East and the South influenced our culture, including music, through Spain and the crusades. The lute, bow and several oriental percussion instruments made their way to Europe and that is why the music of the southern cultures sounds so natural on ancient instruments.

Christians, Muslims and Jews have been living side by side in the Mediterranean countries, as if creating an enormous mosaic of different peoples and cultures, traditions and beliefs. Unfortunately, history tells us a lot of painful stories, where the destructive darker side of man has been ruling over love. However, different cultures and religions still have one thing in common − they all praise the Almighty with the help of music. Music itself is a gift from above, it is our ability to create order from chaos with our voices and instruments, to influence others and be influenced. Music is a universal language and its different dialects can delight anyone with an open mind. So, let it elate us, let it help us rise above our differences and look lovingly at everything created.

The enchanting title of this record immediately lets our mind wander in a world of essences with multiple scents of pleasure. The Andalusian melodies of the Middle East are heard like the stories in the collection of “The Thousand and One Nights". Each takes us to a delightful world where musical poetry reigns supreme. Born from sung poems, these instrumental arrangements allow us to imagine an ideal Spain where the arts and religions coexisted in harmony. If from this period so majestic, we had already tasted the words of the great Averroes, known also as Zizyab the magician, a scholar who generously offers knowledge. We learn from the record of this record that he is a revolutionary, one of the most illustrious initiators of Arab-Andalusian music. A true cradle of Western music, we discover the famous "mouwosh'sha" which will allow the troubadours of our memoirs to create music about the poems of their time.
We also learn that improvisation is an ancient art that begins to emerge during this musical period, and then organizes to become a coherent structure and lead to the form "continuation". Western composers will use it to give us, among other things, those of Bach a few centuries later.
The set "Aromates" distills the musical notes to offer us all the perfumes of the East that we would like to breathe as in this era of tolerance of the great Spain. 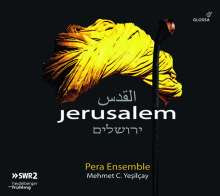 The Pera Ensemble, the recipient of enthusiastic critical reactions on account of its “refined mixture of fragrances and flavours” and “a two-way exploration and enrichment of soundscapes”, takes its name from a district of Istanbul which has been a melting pot of cultures and religions for more than two millennia. This diversity is also reflected in the makeup of the group, where well-known specialists in European historical performance rub creative shoulders with leading representatives of Middle Eastern art music. This cultural adventure, directed by Mehmet C. Ye?ilçay, is set on wresting related early music out from behind closed museum doors in order to stimulate strong sensations and emotions.

Offered up on this album is a cultural panoply as presented by Jerusalem. With it the Pera Ensemble brings demonstrations of soundscapes from another time, in which the full exuberance of early Middle Eastern Baroque is mirrored in the care taken over questions regarding sources and instrumentation. Jerusalem, that rendezvous, is the city of peace, despite all the conflicts – and bridges need to be built to span across all the supposed disagreement. Dialogue has always been facilitated by two factors: food and music. Where Eastern cuisine finds plenty of its creative ideas in spices and exotic ingredients, the Pera Ensemble strives to integrate a parallel philosophy into its programmes.