You are here: Home / Playlists / The Medieval Mysteries

Chants of the Knights Templar, music for the Holy Grail, and the German prince and minnesinger Wizlav the Younger, whose music wound up in Norway. 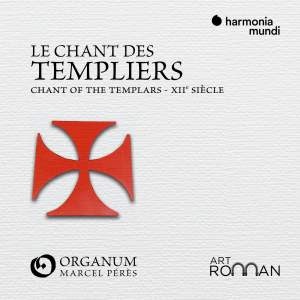 From Music Web International: Ensemble Organum has been making CDs for over twenty years. Their raison-d’être has centred on music as ancient as Roman times right up to the 14th and 15th centuries. If there is one particular era with which one might associate them it would be the twelfth century. They are currently based at the superb Romanesque Abbey church at Moissac in South-West France where they can research this period with financial support from the French Government. This disc was recorded where the ensemble was based until 2001 at the Cistercian foundation of Fontrevraud Abbey built about 1100 in the beautiful Loire Valley.

So often have French ensembles recorded early music at this spot that I decided to go and see it for myself, driving down last May (2006). I arrived exhausted on a hot afternoon to walk into one of the most inspiring and magnificent if somewhat austere of Romanesque church interiors I have ever seen. No wonder it is such a sought after venue, indeed on my arrival a group of singers were setting up for a recording session to take place after dark. And what an acoustic! I sang a few plainsong fragments, the sound swimming around the vaulting and the vast now empty spaces. What a totally inspiring locale in which to attempt to get close to this repertoire.

The highlights for an English visitor lie right in the centre of the nave: the tombs of English Kings Henry I, Richard I and their wives and my dizzy mind starting to say “What music did they hear when Fontrevraud was at its height, as a double abbey for both nuns and monks?”

However this disc is all about the music that might be associated with the ‘Knights Templar’. I’ve always thought of them as a warring group whose main aim was to attack the ‘Infidel’ and ultimately to claim back Jerusalem for Christians. But this is not really the story and on reading Marcel Peres’ fascinating essays I realize how wrong I was. To emphasise the more peace-loving aspect of their lives and their concern for the liturgy and general religious order the disc ends - at least the penultimate track does - with the Antiphon ‘Da pacem domine in diebus nostros’- ‘Give Peace in our time, O Lord’. In 1118 the Templars were founded to guard the holy places in Jerusalem. They were based in the ancient ‘Temple of Solomon’ so that was how they forged their name: ‘The Knights of the Order of the Temple of Solomon’. At first there were just nine knights and they were assiduous at keeping the Latin liturgy in the basilica of the Holy Sepulchre in Jerusalem. The order expanded after 1130 and their influence spread from the Holy land back into Europe. They retained brothers who were especially attached to the daily services and the liturgy and those who took on more material tasks.

The music here comes from a manuscript dated c.1175: “a breviary, written down when Parisian musical circles were just beginning to formulate square notation” (Peres). It is clearly a French manuscript and includes some unique pieces. We know it belonged to a certain Anselm, a monk connected with the Knights Templar’s liturgy at the Holy Sepulchre; a very remarkable manuscript in many ways. Some vocal ornamentation is indicated as is some sense of the rhythm - all explained in Peres’ notes.

How is this reflected in the performances? If you have heard any of the Ensemble Organum’s thirty discs made over a period of 25 years you will know that they have their very distinct sound and method of performance. It was originally inspired by Corsican singers and more generally vocal sounds associated with the near east and/or the Greek Orthodox tradition. This means that the group incorporates singers who have especially cultivated the use of the extreme register, I mean down to D and C below the bass clef. These they sustain as a drone often for some considerable period of time. Other vocal techniques include use of parallel organum, very ornamental solo lines above the drones, and plainsong which is performed not as a free line but moving at a regular pulse with rhythmic patterning sometimes even with a sense of triple time.

The final track, a long Salve Regina is a good example of their approach. The melody is often sung at the end of the day whilst the choir stands around the Lady Altar and statue; it makes an appropriate ending to this well filled CD. The well-known chant - you will recognize it although it has a few changes from the usual - is heard sung in a rhythmical way. Later the verses are performed soloistically with some considerable ornamentation over deep drones which last the entire fourteen minutes or so of the track. The style of singing is open and full-throated. This is a troped text,  that is words are inserted as verses which are not normally part of the hymn, such as the lines ‘The Alpha and Omega sent from on high a glorious solace’. The whole effect is deeply moving, spiritual and quite remarkable.

Mercifully all texts are clearly laid out in the booklet.

Listening to this disc is a fascinating, fulfilling and rewarding experience although you do need to change your musical ears, as it were. You need to listen not as an audience member but to let the music come to you in a spirit of total acceptance and absorption. Allow it to take its time; you can’t rush anything. The final emotion is a spiritual one, so open up the mind and ears and let the full experience sweep you along. 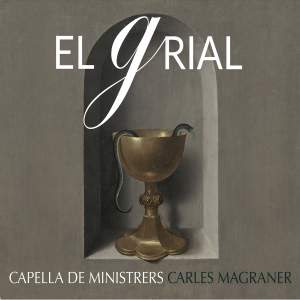 This musical presentation by Capella de Ministrers leaps out from its origins in medieval myths and literature to give listeners a direct connection with the true meaning of the Grail. Capella de Ministrers has gathered together music and poetry from the Middle Ages by authors and composers such as Chrétien de Troyes, Robert de Boron, Wolfram von Eschembach and Hélinand de Froidmont. From Crusade songs, chants sung in pilgrimage centres, medieval literature reflected in music, to the emblematic symbolism the Grail acquired with Alfonso the Magnaminous. Virtud apurar no’m fretura sola (My virtue will not falter until I reach my goal). The music and poetry is all linked to the subject of the Grail and encourages us to discover its meaning through our own personal quest, based on our knowledge of the past and through the recreation of the music.

After his album ' Arrels ' a work dedicated to traditional Valencian music from the perspective of historical music, Carles Magraner presents a proposal aimed at connecting the public with the true sense of the Grail , moving away from the legend and medieval literature to conceive it as an object of personal search from the knowledge of our past and through musical recreation.

The work covers the different musics that make up its path through the centuries, from the Holy Land to Brittany , and from the Pyrenees to San Juan de la Peña until its arrival at the Valencia Cathedral .

Carles Magraner , director of Capella de Ministrers , has supported this discourse since the evolution that the symbolism of the Grail has experienced throughout the centuries: “ Those of us who live in Valencia have a continuous presence of this Holy Chalice , that Aragonese traditions and Valencians identify as the Holy Grail. To start the musical proposal, I first turned to literary sources, which is what we have left of the myth ”, referring to authors such as Chrétien de Troyes, Robert de Boron, Hélinand de Froidmont and Wolfram von Eschenbach , whose songs have been rebuilt since knowledge of language and music about the Minnesänger .

'The Grail' of Capella de Ministrers transports us to worlds of wars and feelings linked to the crusades , a program where allusions to the Virgin Mary, symbol of virtue, chastity and beauty, and tragic love legends such as the from Tristan and Isolde or Tirant lo Blanch .

Jorge García Bastidas , sound and mastering engineer, highlights the location chosen for the production of the album: “We recorded The Grail in Santa María in Requena, a huge church with a great reverberation where the most religious and solemn sounds work very well , so which has a very appropriate acoustics for that project, but also offers a lot of exterior silence 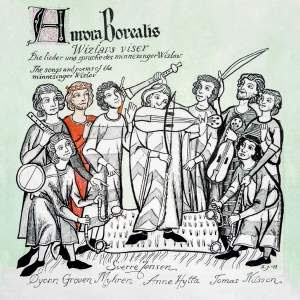 The mïnnesinger Wizlav the Younger is the source of 17 of the melodies, with their accompanying lyrics, in the unique Jena song manuscript from around year 1320.

The Norwegian grand old man of medieval music instruments, Sverre Jensen, arranged 17 pieces by Wizlav and recorded them together with his ensemble, Aurora Borealis. Jensen also reconstructed and built all the string instruments played on the recording.

The melodies on the album, together with their accompanying lyrics, were written by the minnesinger (a German lyric poet and singer of the 12th to 14th centuries) Wizlav the Younger and which may be found in the unique Jena song manuscript from around 1320. Wizlav the Younger is believed to have been Wizlav III, Prince of Rugen (1265/8 ? 1325), the eldest brother of Euphemia, who married Hakon Magnusson in 1299. It is not inconceivable that Wizlav was engaged to entertain at the Norwegian court during the reign of King Hakon and Queen Euphemia.

In addition to Sverre Jensen playing plucked instruments and hurdy-gurdy, the members of Aurora Borealis are Oyonn Groven Myhren (vocals), Anne Hytta (bowed instruments) and Tomas Nilsson (percussion and hammered dulcimer). Most of the musicians have roots in the Norwegian folk music tradition, as can be seen in their presentation of the Wizlav material.