You are here: Home / Playlists / The Routes of Slavery

At last, the long-awaited Grammy-nominated latest box set from Jordi Savall has arrived, tracing music from slave routes from 1444-1888.

N.B.—All of the music on this program is from the Grammy-nominated boxed set (including DVD) of the latest from Jordi Savall, Les Routes d’esclavage”: The Roots of Slavery 1444-1888.  It is on the Alia VOX Label and is CD AVSA9920. 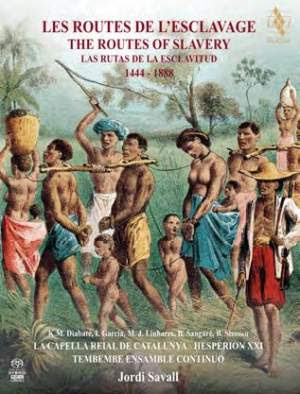 Savall’s ambition is to trace through music the history of the European slave trade from 1444, the year of the first mass slaving expedition of the Portuguese to Guinea, through to 1888, the year slavery was finally abolished in Brazil.  In his booklet note Savall describes slavery as “the most monstrous of all the man-made institutions created throughout history”, and that passionately held belief motivates a musical history that is as powerfully humane as it is musically satisfying.

Savall is already one of the greatest musical and cultural polymaths we have today, but this lifts him to a yet higher plane.  His traditional collaborators of La Capella Reial and Hespèrion XXI are on the scene here, but they are joined by a cast of African and Latin American musicians who claim this music as their own from a position of strength.  There is no danger of post-colonialism here: instead these musicians make a triumphant claim to what used to be a heritage of oppression, and they are treated as equals with their European colleagues.  Not only does this make great musical sense, but it’s also a powerful gesture of equality and of reconciliation.

I could say much more about this, and about Savall’s brilliant way of bringing the whole ensemble together, but what about the music itself?  Well, there is a little European music on offer, but mostly Savall and his team present music that has come from the oppressed and the conquered, and this makes an enormous impression. The first thing that strikes you is just how lively and upbeat so much of it is. Yes, there are laments for the loss of land and liberty, but the huge majority of the music here is actually foot-tappingly invigorating, and I suspect that’s another way of Savall subverting the traditional narrative of the tragedy of the wretched. Much of it also shows a particular way of adapting to their adopted religion of Christianity. There are, for example, a lot of “Negro” songs celebrating Christmas, and it’s brilliant to realise just how lively those are.  The roots of contemporary African-American Christian worship run deep.  There is also one fascinating carol that acts as a dialogue between the Spaniards and the Indians, critiquing the problematics of their relationship as well as praising the Virgin and Child.

You can also hear how quickly the slaves adapted their music to their local surrounding (or, perhaps, vice-versa).  The Son de la Tirana is a Mexican ditty that sounds remarkably contemporary, as does the Brazilian Sai da casa. The Brazilian Warrior’s Song is like something you would hear on Radio 2 today, so modern does it sound in its lilt and structure, and the Colombian El Torbellino makes you want to dance along with the performers.  They literally dance during La Iguana, and I defy anyone to resist wanting to join in with them.

You also see how the traffic works in two directions, with a very winsome Christmas song by Filipe da Madre de Deus, the Portuguese Baroque composer, which has clearly been influenced by some of the “negro” music that he had heard.  Similarly, Juan de Araujo began his career in Spain but became Maestro di Capella of Lima Cathedral in Peru and eventually died in Bolivia, and you can sense that in his dancerly Christmas carol, which even includes an exhortation for “Blacks” to visit the crib.

It’s the musicians and singers of Tembembe Ensamble Continuo that really give this collection its colour, but 3MA, a string trio of oud, kora and valiha (all African instruments) also contribute something extremely special. They play a Malian melody that I found utterly enchanting, with all the appeal of an earthy folk song wrapped up in the mysterious beauty of their instruments.  They are just as good when accompanying the singing of a poignant Malian song about the passing of youth, or when playing a Madagascan tune that reminded me ever so slightly of Celtic folk music.

Throughout the programme, the music appears among spoken texts, which are every bit as well chosen, and read with tremendous character by Bakary Sangaré, a French actor of Caribbean descent. They trace the story of slavery with indicative texts that are taken broadly chronologically, and they include a fascinating description from 1657 of slave music in Barbados.

The book that accompanies the release is phenomenal, taking in 540 pages in five different languages.  The essays are extraordinary in the accessibility of their scholarship, and the book also contains all the texts and translations of both the narrations and the songs. You get the audio on two Hybrid SACDs, plus the DVD film of the concert in 2.0 stereo, and I’d recommend watching it as well as hearing it because the energy of the performers is infectious.  (On the DVD, incidentally, the spoken text is translated in subtitles but the sung texts are not.)

Not only does this ambitious set give us the chance to contemplate the history of slavery, but it also contains a cri de coeur about so-called “modern slavery”. It is estimated that more than 30 million people are still affected by forced labour, trafficking and sexual slavery in our world, and Savall’s package is a timely way of reminding us that this must not be tolerated.

All in all this is a triumph of history, of music-making, of world music, and of humanitarianism in general.  Making this a Recording of the Month seems too small an honour.