You are here: Home / Playlists / The Tudor Renaissance

From the obscure (Edmund Sturton) to the famous (the masses of William Byrd), recent releasescelebrate the glory of Tudor England.

NOTE: All of the releases on this program are from recent recordings of English music from the 16th century. 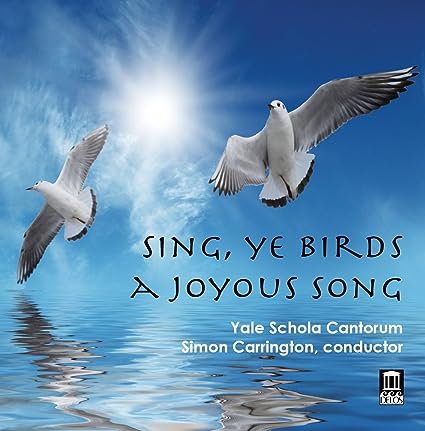 From James Manheim, AllMusic.com: Collegiate choral singing is nowhere near the industry in the U.S. that it is in Britain, but the Yale Schola Cantorum and a few other choirs continue to attract top-flight conductors from abroad and, from time to time, to put out interesting releases like this one. The Schola Cantorum has also enjoyed the services of Masaaki Suzuki, and between him and Carrington, a former member of the King's Singers, it has attained a high level of pitch accuracy. More than that, the singers show themselves adept in the widely varying collection of styles on this release, even among the Renaissance pieces. John Taverner's Western Wind Mass is one of the landmarks of early Renaissance English polyphony, with sweeping, irregular lines and dense, non-imitative polyphony that requires close small-group ensemble work. Orlando Gibbons' Magnificat and Nunc dimittis are splendid examples of high Renaissance sacred music, with a rousing, rock-solid Magnificat followed by a deeply meditative Nunc dimittis, while Tallis' Te lucis ante terminum is spare and revealing of any possible flaws. So far, so good, yet the real appeal lies elsewhere: the sound of the choir is quite different from those of its English counterparts, with fuller, richer voices shaped by the experience of American music and culture, and this is perhaps what appeals to the foreign conductors. It proves ideally suited to Richard Rodney Bennett's broadly appealing The Glory and the Dream, a work commissioned in the year 2000 by a group of American, Canadian, British, and Australian choirs. The work sets parts of William Wordsworth's long poem Intimations of Immortality from Recollections of Early Childhood, a progenitor of the Romantic exaltation of youth, and to hear it sung with the peculiar enthusiasm of this group is a real pleasure. Notes, some of them written by the student choir members, and reasonable sound from a large Episcopal church in New Haven are other attractions. 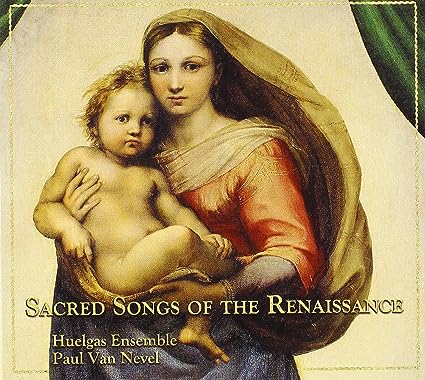 Sacred Songs of the Renaissance combines the virtuosity of one of the top choirs in the world with the musical sensibilities of producer Ellen Holmes. All of the pieces are Renaissance settings of religious texts recorded by the Huelgas Ensemble. From their catalogue, Ellen selected and sequenced these pieces to draw the listener ever more deeply into a contemplative religious experience.

The Huelgas Ensemble was founded by Paul Van Nevel in 1971. The Belgian group is noted for recording unknown works and for their "burnished" sound. They have made more than 50 recordings for Sony Music and France’s Harmonia Mundi and have earned many significant awards. This CD focuses on Renaissance polyphonic music--i.e. multiple simultaneous harmonies as distinct from Medieval monophonic "Gregorian" chant. The album features the only recording of “Gaude Virgo Mater Christi à 6”, an English sacred piece from the Eton Choirbook (a collection of some of the earliest polyphonic music), as well as “Spem in alium: Forty-part motet” and “Ecce beatam lucem: Forty-part non-liturgical motet”, two of the most complex polyphonic works in the Western repertoire.

From The Guardian (five star review): Byrd's double life, in public a member of Queen Elizabeth I's Chapel Royal in a newly Protestant England, in private a covert Catholic, directly shaped his music. Grand works such as the Great Service are among the glories of the English choral tradition. In contrast, the three Latin masses set here, long neglected, were for amateur, chamber performance in hidden Catholic communities. Westminster Cathedral Choir may sing them with more splendour and finesse than Byrd himself would have expected, yet the results are uplifting and moving. It's no slight to these musicians to say the disc is worth buying for the Byrd scholar John Milsom's incomparable notes: a masterly encapsulation of Tudor church music history in a few dense pages.

1.
Mass for 5 Voices by William Byrd

2.
Mass for 4 Voices by William Byrd

3.
Mass for 3 Voices by William Byrd