Francesco Landini as seen by eastern musicians, more from the Irish Baroque, and the roots of popular song in Valencia. 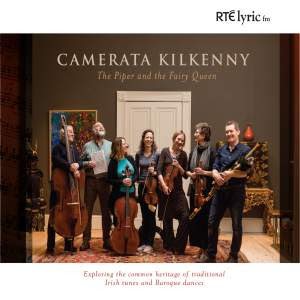 The connections between baroque and traditional Irish music are explored in this fascinating new recording, which brings together the traditional music skills of uilleann piper David Power with acclaimed early music group Camerata Kilkenny. The opening track, Carolan’s Sí bheag, sí mhór sets the tone for the CD, beginning with the solo pipes before being underpinned by Barry Guy’s jazz-influenced bass-riffs and then the singing strings of the rest of the group.

What follows in compositions by Telemann, Purcell and Leclair, and a number of traditional tunes is a celebration of Ireland’s musical history. Key to the performance of both styles of music is ornamentation – the use of grace notes, runs and trills - which brings the written notes alive, giving the music a feeling of improvisation. So while the music derives from the eighteenth century, this live exploratory edge really gives these performances a contemporary feel.

In both Suite La Musette in G minor, No. 6 by Telemann and the Pifa from Handel’s Messiah, Camerata Kilkenny led by Maya Homburger, the idea of the drone provided by wind-blown pipes is conveyed figuratively by the lower notes of the strings in imitation of the baroque musette, an antecedent of the uilleann pipes. Following on from the Pifa, David Power plays a virtual tone poem for solo uilleann pipes, The Fox Chase, conveying the melody on an old chanter, once referred to as ‘the 18 Moloney’ which was made before the Great Famine, in Co. Clare.

It is these connections – the performance style, musicianship and composition histories – that make Camerata Kilkenny: The Piper and the Fairy Queen such an engaging CD. Not to be missed also is Marja Gaynor and Claire Duff’s charming account of Telemann’s Gulliver Suite for two violins, an example of eye music where the Lilliputian chaconne is written in teeny-tiny quasihemidemisemiquavers and the Brobdingnagian gigue is notated in great big semibreves.

Camerata Kilkenny: The Piper and the Fairy Queen was recorded in the wonderful acoustic of an eighteenth century Georgian house in Co. Kilkenny, resulting in a warm, accessible sound perfectly complementing the music. This new release from RTÉ lyric fm is a must for anyone interested in the musical traditions of Ireland and Europe.

From Amazon.com: This is a collection of early and traditional music from Valencian sources, entitled Arrels (roots) and demonstrating the close relationship between art (classical) and popular music. It’s performed by the excellent Valencia-based early music ensemble Capella de Ministrers, directed by gambist Carles Magraner, who have already brought us a series of outstanding and highly imaginative early music recordings. The formats of the fifteen pieces here include work songs, sacred chants, lullaby, ballads and dances of various kinds. This lively variety of works are all linked together by the earthiness and folkloric qualities of the music, in its turn nicely refined by these beautifully scored and executed performances.

Instruments have the upper hand in this programme, but the programme does include several pieces sung by soprano Èlia Casanova and tenor Josep Aparicio (the latter popularly known as Apa). The two singers deliver their pieces with great panache and agility, and the instrumental ensemble - including viols, flute, dulcian, harp and percussion - play with terrific verve, and with percussion enhancing both colour and driving force in some of the pieces. Among my favourites are ‘Boleros de Guadassuar i l’Alcúdia’ (track 4), a vocal duet with substantial instrumental passages in a sequence of great tunes to a pounding rhythm; the lovely build-up of the slow dance in triple time ‘Peteneres de la Vilavella’ (7); the inexorable, powerfully rhythmical ‘La perdiueta’, another very catchy triple-time, jota-style dance movement; and the soprano’s variations on the La Follia theme, ‘Goigs a Nostra Senyora de l’Antiga’ (14).

But in truth all the numbers are highly attractive and enjoyable, and there is not a single dull moment; instead, the enticing and charismatic music sweeps the listener along in an irresistible flow of melody. There are hardly any composers’ names here, but rather this is ‘early music’ with a timeless quality, and with the universality of music that has evolved through centuries of performing traditions. Carles Magraner’s direction is both spirited and beautifully judged, singers and players all perform superbly, and the disc is likely to prove a treat for a wide variety of music fans. The digipak comes with excellent notes, good session photos and all texts and translations.

Since their first joint CD project in 2011 Katharina Bäuml (shawm) and Margit Kern (accordion), as the ensemble Mixtura, have developed programmes, which combine music of the Middle Ages or the Renaissance with specially commissioned pieces of New Music. Their precept is the examination of one certain starting point, which, in the course of the programme, combines both musical fields with each another. Their present album looks at a musical icon of the Trecento and examines to what extent the themes of the 14th century are compatible with today’s attitudes and aesthetics.
1. Questa fanciull' amor Nr. 1
2. Ecco la primavera - Omaggio a Francesco
3. Cosi pensoso
4. Ecco la primavera Nr. 1
5. Reflections on Ecco (Improvisation)
6. LANDinitialisierung
7. Fa metter bando
8. Lucente stella
9. Lasso di donna
10. In sechs Richtungen
11. Improvisation
12. Ecco la primavera Nr. 2
13. Deh dimmi tu
14. Bitterer Wein
15. Questa fanciull' amor Nr. 2