You are here: Home / Playlists / Crossing Over, More Examples

Geminiani and the Celtic Influence, Sea Songs with the Canadian Ensemble La Nef, and the devil’s music in the New World.

I. Give Me Your hand: Geminiani & the Celtic Earth (Les Basses Réunis/Bruno Cocset). Alpha CD 276. 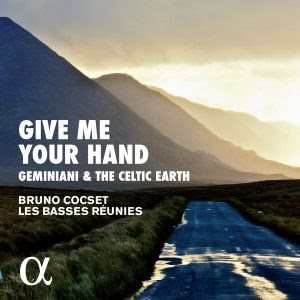 Some of the Italian musicians who came to London to ‘make their fortunes’ found themselves influenced by the Celtic lands and their rich tradition of folk music. They were in their turn admired and sometimes even copied by their counterparts in the British Isles. This recording shows the outcome of that encounter. Lorenzo Bocchi was probably the first Italian cellist to settle in Edinburgh, in 1720. Francesco Geminiani (1687-1762) arrived in Dublin in 1733. Since 1714 he had been resident in London, where he performed with Handel, but his passion for art dealing landed him in prison. The Earl of Essex then took him under his protection in Dublin, where he swiftly acquired a high reputation. In 1749 he published in London a collection of songs and tunes arranged as sonatas for several instruments combined with a treatise that gives us much useful information on how to play this music.

James Oswald (1710-1769), whom Geminiani greatly admired, was a prolific Scottish composer. Turlough O’Carolan (1670-1738), a harper who went blind at the age of eighteen, travelled throughout Ireland as an itinerant bard in the service of aristocratic families. This disc brings these four musical protagonists together in an imaginary meeting (or perhaps it actually took place!) in Dublin.

1.Turlough O’Carolan - Sqr. Woodes’s Lamentation on y Refusauall of His Half Pense 02:36

8.Francesco Geminiani - A Treatise of Good Taste in the Art of Musick: Sonata I "The Broom of Cowdenknowe’s" (Grave) / "Bonny Christy" (Andante - Grave - Presto) 03:27

9.Lorenzo Bocchi - Plea Rarkeh Na Rourkough, or a Irish Weding Improved with Diferent Divisions After an Italian Maner with a Bass and Chorus by Sig.r Lorenzo Bocchi 04:09

19.Francesco Geminiani - A Treatise of Good Taste in the Art of Musick: Air IV "Sleepy Body" 03:08

From CBC Music: "When a song can quiet two dozen drunks, you can be confident that there is something there that's worth listening to," says Seán Dagher, music director of Sea Songs & Shanties, the latest album from La Nef, due out May 5 on ATMA Classique. "I have sung some of these in pubs for years and I was confident that they would suit a listening audience just fine."

Most of the album's 16 tracks come from Stan Hugill's collection of sea shanties. "Stan was of the last generation of sailors to work the sailboats, before it was all steam engines, and he collected hundreds of songs from his colleagues," explains Dagher. "It's impossible to tell the exact provenance of most of these. They travelled with the sailors wherever they went. But some are clearly American and some probably Irish."

For over 25 years, Montreal's La Nef has been creating concerts and recordings at the intersection of world, traditional, contemporary and early music, with consistently astonishing results. On Sea Songs & Shanties, Dagher shares arranging credits with Dave Gossage and Nelson Carter, but points out that it was an organic process: "The skills that [Gossage and Carter] have that really make this work is their improvisational arranging. I wrote out a few parts for them but mainly I would tell them what I was looking for in a given section and they would make up something as we went. It was never the same twice and it never will be the same again."

It's not the first time I have taken oral tradition music and tarted it up for the [concert] hall.

"It's not the first time I have taken oral tradition music and tarted it up for the [concert] hall," notes Dagher. "If you choose the right songs it can work quite well. The difference this time was that I was careful not to make it too 'nice.' I left lots of room for the boys to be piratey."

The boys in question are classical singers Nils Bown, Michiel Schrey and Clayton Kennedy — "I asked them to use a whole range of styles, from pirate to crooner to choriste to opera star" — plus Gossage (flutes, voice, percussion, harmonium), Carter (violin, voice, percussion), Andrew Horton (double bass, voice) and Dagher (voice, cittern, harmonium, shruti box). This is music conceived by sailors, to be performed by (all-male) crew-members. "No women on a ship," Dagher tells us. "It's bad luck."

If you're a gamer, you may already be familiar with these shanties from Assassin's Creed, the popular video game set during the American Revolution. Gossage has been producing the music for Assasin's Creed games since 2012, and he hired Dagher and company to sing shanties on the soundtracks for several games in that franchise.

"We were American soldiers, British soldiers, tavern singers and sailors," Dagher says. "Apparently, in the game, you can go into pubs and there is a band playing. That was us."

"The sailor portion of the music was so popular with Assassin's Creed fans that they decided to base the next edition solely around that," he continues. "We recorded 53 shanties for Assasin's Creed4 ('Black Flag') in 2013. I think players can collect songs as they sail around. People have told me that you can skip directly to your next destination but they don't because they enjoy listening to the songs."

The "Black Flag" instalment was such a hit that Assassin's Creed released another shanties-based game called "Rogue," for which they recorded 30 more songs.

"I'm glad that the Assassin's Creed phenomenon has brought this music to popular attention," Dagher confides. "I get a kick out of seeing teenagers flip out when they hear the start of one of these songs and then sing along to the whole thing."

Far from the pseudo-clichés of advertising, this recording explores the very sources of Andine music, a successful blending of Pre-Columbian and Conquistadores musical traditions on the one hand and music of African slaves on the other hand.
The new proposal of the Cantos de la Tierra series by ALPHA offers a special interest for the Hispanic public. This is a delicious approach to the best samples of traditional Andean folklore that the interpreter and researcher Diana Baroni has collected and updated from the famous Manuscrito de Trujillo, one of the greatest musical sources left over from the times of the colony. With an excellent group of musicians that shed piece by piece the irresistible sounds and the infectious rhythms of instruments like the guapeo, the charango, the Jesuit harp, the quena or the zampoña, Diana Baroni (flutist, besides excellent singer) signs a work outstanding from the musicological point of view, a trip to one of the most fertile corners of history, which she explains with these words: Since I approached traditional music as an interpreter my curiosity was directed towards the relationship between the written sources of ancient music and oral tradition. The richness of traditional music alive today throughout Latin America is the result of the fascinating process of miscegenation that occurred from the sixteenth century, with the unexpected arrival of Europeans to American lands. I chose the region of the old Viceroyalty of Peru, one of the meeting points of three cultures: Spanish, African, and indigenous.
Little by little, more and more elements of complicity between European music and the roots of traditional music were appearing: the presence of the waltz, the metrics of the Spanish Golden Age poetry adopted by the Peruvian songbook, the Baroque instruments converted or transformed , still in use today, such as the harp, the vihuela, the mandolin, the flutes ... A fundamental source in this search was the Manuscript of Trujillo - coastal city of Peru - bequeathed by Don Baltasar Martinez Compañón in the 18th century. There appear tonadas and dances of music probably heard in the streets - something that we could imagine as the folklore of that time. Black rhythms with his percussion of African origin were seducing and guiding the interpretation of tunes like El Congo and La Donoza. Thus, under the light of the Afro-Peruvian tradition, the Trujillo sheet music revived in the form of maritime, landau or celebration. Instruments such as the jaw, the box, the Czech -which would later give rise to the current Peruvian box- are present in some of the watercolors of the Martinez Compañón fountain. The existence of the Cashua, or the El Diamante tune between the pages of the manuscript, reflects the indigenous presence with its wealth and its personal language. Through the work of recreation I understood the need to accompany those ancient melodies with themes of current folklore; after all, the water that made the tonadas flourish was the story that lives today in the Afro-Peruvian oral tradition. The result of this musical search, which aims to combine the old with the new, is condensed in this Son de los Diablos. Diana Baroni