You are here: Home / Playlists / Three Eras of Christmas

A medieval service for St. Nicholas, Renaissance works from the new ORA recoding, and Apollo’s Fire with "Christmas on Sugarloaf Mountain."

I. The Night of St. Nicholas: A Mediaeval Liturgy for Advent (La Reverdie/I Cantori Gregoriani). Arcana CD A442.

Winter feasts like the Latin Saturnalia and the Germanic Yule, airborne gift-giving figures like the Norse Ođinn Jólnir, the Slavic Ded Moroz, the Dutch Sinterklaas: from time immemorial December skies have been rather busy. Pagan patterns were readapted to Christianity – and a canonised bishop from fourth-century Asia Minor, Nikolaos, whose feast occurred near the winter solstice, merged with another bearded benefactor. Wotan’s hood and Nicholas’s mitre were mixed up, and by the nineteenth century Santa Claus was ready to don new red and white robes and to deliver toys on both sides of the Atlantic. The pieces on this recording (mainly from a thirteenth-century English manuscript) belong to the liturgy for the eve of the Feast of St Nicholas: they allude to his picturesque feats, such as the rescue of three needy maidens or the taming of a storm. Readings and additional songs come from the repertory associated with this widely popular saint, celebrated throughout the Middle Ages from Italy to Iceland. Originally released in 1998, this joint performance by La Reverdie and Cantori Gregoriani received enthusiastic reviews in several music magazines: ‘For those who want to enjoy some of the best liturgical singing this is highly recommended’ (Early Music, 1999).
From Ralph Graves: Performance practices change — even in the field of early music. In the early 1990s Anonymous 4 burst onto the scene, making medieval music sound vibrant and alive. Other ensembles built upon their success, each with their own take on the repertoire. “The Night of Saint Nicholas” was originally released in 1998. So how does it hold up after almost two decades? Very well, actually.

The release is a collection of sacred music revolving around Saint Nicolas, most dating from the 13th Century. La Revier and I Cantori Gregoriani deliver performances that are beautiful in their simplicity. The ambiance of the recording site —  the Church of San Damaso, Modena, Italy — perfectly matches the music. The reverberation fills the spaces between the notes without blurring them.

I’d almost say these are classic sacred early music performances. There’s the ethereal quality essential to the style. Each selection unfolds at its own unhurried pace.It evokes a sense of timelessness that not only transcends the centuries but the trends of the last 20 years. This release doesn’t sound dated at all. Rather, the sound seems as ageless as the legend it celebrates. 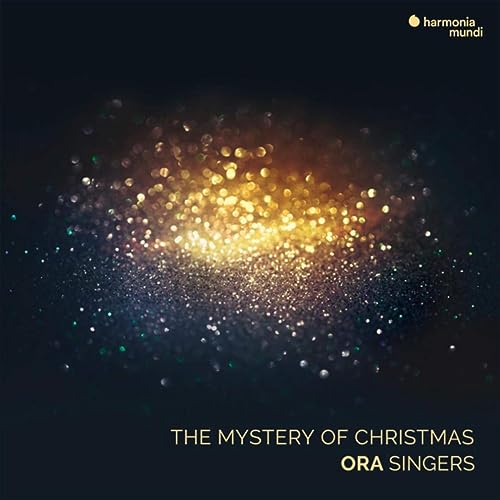 The story of Christ's birth has prompted generations of composers to expressions of joy and mystical reflection. ORA's selection of carols for this album unveils a whole treasure chest of offerings, some familiar, some less so, all giving voice to various elements of the nativity story. Produced with the generous support of the Pureland Foundation, The Mystery of Christmas focuses on the miraculous Incarnation and the central role of the Virgin Mary. Highlights include Richard Allain's arrangement of the Coventry Carol, Morten Lauridsen's O Magnum Mysterium and a carol by John Rutter written specifically for ORA's director, Suzi Digby.
From Classics Today: First things first. If you want to hear Morten Lauridsen’s setting of his wildly popular O magnum mysterium the way it should be heard, this performance by Suzi Digby and her ORA Singers is the one–surely the most affecting and successful among more than a few dozen recorded and live performances I’ve heard, most of which were very fine. This one, which concludes the program, is special for the way it almost uniquely captures the work’s resolutely flowing harmonic wall of sound–and my only question is how these 23 singers did it with only four–four!–basses. This is a supremely textural piece that depends not only on consistent and careful balances among parts, but on a solid bass foundation, especially at its famous climactic moment near the end. But somehow (again, with only four basses), the whole thing comes off here like nowhere else–and although the rest of the disc has its memorable moments, this extraordinary ending will leave you both very satisfied and not necessarily able to remember many of the earlier pieces with the same degree of enthusiasm.

There are 18 other pieces on the disc–and these days, a choral Christmas program typically focuses on modern works–often by composers you’ve never heard of–along with a few early pieces, here by Byrd and Tallis and several anonymous medieval songs–and something or two or three by established contributors to the genre, here represented by Judith Weir, John Rutter, and Steven Sametz. These compilations, when wrongly chosen and misguidedly organized, sometimes result in a frustrating and disorienting experience for the listener, veering from a standard Britten piece, or Vaughan Williams or Willcocks arrangement, to a wildly dissonant, stylistically “out-there” work by the latest cool King’s College composer fave, and then back again to a traditional version of In the bleak mid-winter or Balulalow.

But not here. Yes, the majority of the works will not be familiar to most listeners–Adrian Peacock’s Venite, Gaudete!; Jamie W. Hall’s As I lay upon a night; Ben Rowarth’s There is no rose; Thomas Hyde’s Sweet was the song; Cecilia McDowall’s Now may we singen; or Fredrik Sixten’s Mary’s Lullaby (Silent Night). But these are almost all thoughtfully conceived and well written and go together as a cohesive concert program–only Roderick Williams’ O Adonai, et Dux domus Israel, at seven minutes, seems a bit disorganized and somewhat long for its material–although it has its “moments”. Sixten’s “jazzy” version of Silent Night and Sametz’s appropriately, infectiously lively Gaudete are highlights, as are Richard Allain’s spicy setting of Coventry Carol and the Byrd and Tallis entries (O magnum mysterium and Videte miraculum, respectively).

It’s not easy these days to come up with a new Christmas recording program that will entice and inspire serious fans of this long-established, very specialized genre of choral music–but this one makes a fine and I think very successful effort. And really, the Lauridsen performance is one to be savored.

Following the release of the award-winning Sugarloaf Mountain: An Appalachian Gathering (AV2329), which was a Top 5 Billboard Classical Crossover hit, Jeannette Sorrell and Apollo’s Fire present Christmas on Sugarloaf Mountain. In this celebration of the American immigrant experience, fiddlers, medieval harp, hammered dulcimer, bagpipes and singers join with children’s voices to evoke the Celtic roots of an Appalachian Christmas. From Christmas Eve in medieval Scotland to folk carols and shape-note hymns at a toe-tapping Christmas gathering in Virginia, Apollo’s Fire follows the journeys of the Irish and Scottish settlers who bravely crossed the Atlantic, settled in the mountains and welcomed Christmas with love, singing, dancing and prayer.
From Gramophone Magazine: There are other ways to reveal fresh musical truths in the context of Christmas, and the determination of another early music group to do so has produced my vote for Festive Disc of the Year. Christmas on Sugarloaf Mountainfrom Apollo’s Fire charts the passage of Scottish and Irish immigrants to the Appalachian Mountains  in the 1830s. The Baroque group gives us sounds we don’t often associate with Bethlehem but are probably far closer to what was heard there: zingy harps, reedy winds, and plenteous modality. At first it sounds like a try-hard jamboree. You quickly realize it is far more, built of extreme focus yet huge variation of mood, geography and style—from Medieval to Soul, Somerset to Kentucky. It is sung and played with an expertise that doesn’t trespass on enjoyment and it draws you deeper and deeper in across its six chapters. Jeanette Sorrell’s arrangements get to the point: I wonder as I wander is urgent in its whimsy; her Yorkshire Carol has a tasteful brand of musical humour not often heard in seasonal music. For all the breathless rollicking and earnest exploration, there are tears under the surface that highlight a vital part of the Christmas story, enforced emigration and all. The Southern folk hymn Bright Morning Starsand the quiet finale The Parting Glass remind us that, sometimes, two beautiful voices entwined together and imbued with feeling are powerful enough.