You are here: Home / Playlists / Three from Avie

Two from the Tenet Ensemble, and a Sephardic Journey with Apollo’s Fire.

NOTE: All of the music on this program features music from the Avie label. For more information: 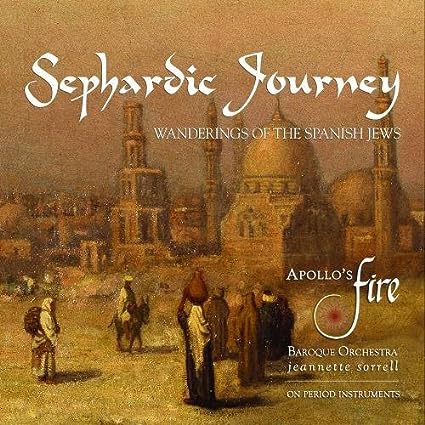 From AllMusic.com: The Cleveland, Ohio early music group Apollo's Fire and its director, Jeannette Sorrell, here attempt something unusual on two different fronts, which makes Sephardic Journey recommendable right off the bat. First of all, the music here will be unfamiliar to most listeners who haven't specifically studied the world of Spain's Sephardic Jews and their diaspora. Soprano Nell Snaidas has studied the medieval Jewish-Spanish Ladino language of the folkish songs, and baritone Jeffrey Strauss has not only sung in Hebrew, but instructed the choir in the liturgical pieces. Few listeners will know of the music of early Baroque composer Salomone Rossi, who impressed his Christian patrons in Mantua and contributed music to their festive ceremonies; his work was so highly valued that he was exempted from wearing the Star of David required for other Jews. His settings of the Songs of Solomon, composed largely in secret for Jewish observances, are impressive examples of the Monteverdi style with a good deal of Byrd-like inward power that the singers of Apollo's Fire capture effectively. Sample Rossi's setting of Psalm 112 (track 14) for a taste. Beyond these novelties lies yet a deeper one: Sorrell combines music of several centuries in a convincing thematic way that has rarely been matched, whether dealing with Jewish music or some other tradition. She organizes the program into themes of Jewish life, beginning with a longing for Jerusalem, and proceeding to "The Temple," "Love and Romance," "The Sabbath," and "Feasting and Celebration." These hold together the various kinds of music included to a degree that indicates the underlying cultural unity of it all -- which is precisely Sorrell's point. This is something of a heartland American counterpart to the thematic albums of Jordi Savall, and it works remarkably well.

6. Salamone Rossi Hebreo: Al Naharot Bavel (By The Rivers Of Babylon - Psalm 137), From The Songs Of Solomon

13. Ki Eshmera Shabbat (If I Guard The Sabbath) TENET presents 'The Secret Lover', celebrating music by, for and about women paying tribute to the 17th century Concerto Delle Donne, a trio of extraordinarily gifted professional female singers who were renowned for their performances in the courts of the late Italian Renaissance.

Three of TENET's own leading ladies - sopranos Jolle Greenleaf and Molly Quinn, and mezzo-soprano Virginia Warnken Kelsey - honour the spirit of these pioneering women with a recording featuring solos and trios that weave a story thread to create a musical portrayal of three women and their complex emotional lives. As a 21st century tribute, TENET has commissioned a new work by Pulitzer Prize-winning composer Caroline Shaw, which they perform alongside music by Caccini, Rossi, Strozzi and others.