Sacred music by Giovanni Fasolo, a new recording of Salomone Rossi, and the rarely-heard works of Giovanni Antonio Rigatti.

Salomone Rossi's output was influenced by more than the events of his times and such a figure as Monteverdi. What makes him different is that he was Jewish by birth and upbringing and was deeply affected by his relations within the Jewish community in Mantua and the age-old music of the chanting of the Old Testament Book of Psalms in the religious ceremonies he would have attended. Echoes of this ancient psalmody can be heard in the profoundly religious feeling of his arias, almost as though Rossi were attempting to keep his distance from a trend - already present in the late 1500s due to social, cultural and aesthetic factors – towards using sacred cantatas as an exercise in baroque vocal extravagance to showcase the skill of the performer rather than inspire religious feeling in the listener. 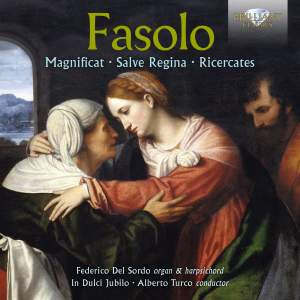 The major surviving works of a late-Renaissance friar-musician working in the chapels and courts of southern Italy, performed by one of Italy’s premier early-music ensembles. Giovanni Battista Fasolo (1598-1664) took Franciscan orders as a young man and worked in Naples and Rome as a master of music at various chapels before moving Sicily, where he held the post of maestro di cappella to the Archbishop of Monreale, near Palermo, from 1659 until his retirement or death in 1664, when his name disappears from the historical record. Interspersed here with solo organ works are eight alternatim settings of the Magnificat, in which a choir intones a line of the hymn, followed by an instrumental fantasia based on the line of chant. Two organs are represented on the album, both of historical significance. The Magnificats, the Salve Regina, the Ricercate, and the Fughe sopra Girometta and Ut re mi fa sol la were recorded on the Antegnati organ (c. 1589) in Verona Cathedral; whereas the Canzoni are played on the organ at Trevi in Umbria, built in 1509 by Paolo Pietro da Montefalco. Despite subsequent alterations, the original nucleus of the pipes remains intact, such that when the instrument was restored during the 20th century the sound equipment was found to be pretty much as it was when it was first installed. Today it is recognized as one of the earliest organs in the world. This album is the latest in a series of successful partnerships on record between the organist and harpsichordist Federico del Sordo and the priest and conductor Alberto Turco. Together they have also recorded alternatim mass settings by Claudio Merulo (BC95145) and Giovanni Salvatore (BC95146). del Sordo has also accompanied the violinist Valerio Losito in Baroque sonata albums by Telemann (BC95131), Tessarini (BC94787) and Veracini (BC94822). The Merulo album was welcomed by MusicWeb International for its ‘stark beauty’ as ‘a fine experience… well worth exploring.’ There is much rewarding listening here for fovers of Renaissance and Baroque choral music as they explore another overlooked figure. Giovanni Battista Fasolo (1598-1680) was born in Asti (Italy) and spent his life as a Franciscan Friar in Rome, Naples and finally as Maestro di Cappella at the Cathedral of Monreale, Sicily. He is mainly known for his “Annuale”, the largest compendium of organ music for liturgical use written in the 17th century. This new recording presents his Magnificat, the Salve Regina and a collection of Ricercares and Canzonas, written for organ, and also used in the liturgy, all splendid examples of Italian sacred music in the transition from Renaissance to Baroque. Played on two rare historic organs: the Antegnati organ (1589) in the Verona Cathedral and the Montefalco organ (1509) in Trevi (Umbria). Played and sung with total dedication and deep knowledge of the style by organist Federico del Sordo and In Dulci Jubilo conducted by Alberto Turco, who already successfully recorded similar repertoire for Brilliant Classics: Organ Alternatim Masses by Merulo and Salvatore. The scholarly written liner notes are by the artists.
Ricercata prima

Estro Barocco was created in 2000 by a group of passionate musicians whose desire was to allow the general public to know and appreciate small, rich, and varied jewels of an immense repertoire- the sixteenth-century chamber opera. Estro Barocco performs rediscoveries of forgotten works, and brings them to the attention of the modern public through transcripts of ancient prints. On this new release they perform the Mottetti a Voce Sola per Soprano by Giovanni Antonio Rigatti, an Italian composer and choirmaster who released nine volumes of spiritual music and two books of secular music during his life. Although Rigatti’s music is largely unknown, this release will delight lovers of Baroque music.
RIGATTI: MOTTETTI A VOCE SOLA PER SOPRANO – LIBRO II (1647)