Lamentations by Antoine Brumel, Psalms by Lassus, and music from Renaissance Prague. 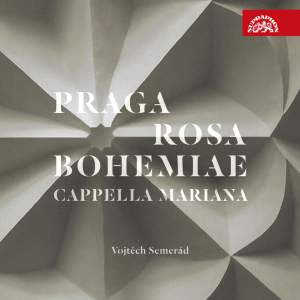 The focal point of the album is the recently rediscovered Prague manuscript of polyphonic masses, with the fabulously survived Missa Presulem ephebeatum by Heinrich Isaac, one of the most significant masters of the Franco-Flemish polyphonic style. Petrus Wilhelmi de Grudencz’s Presulem ephebeatum, whose thematic material inspired Isaac, attests to his mass being connected with Bohemia and Prague.

• The album contains a number of other extraordinary pieces - Josquin Des Prez’s celebrated Stabat Mater, with the added sixth voice, which has been uniquely preserved in this form in Bohemia. 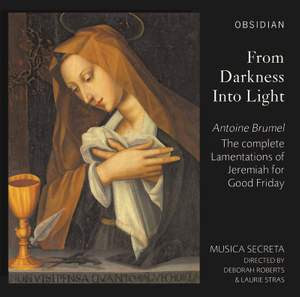 Musica Secreta, the UK’s premier female-voice early music ensemble, releases a new recording based on a major new discovery, the complete setting of the Lamentations of Jeremiah for Good Friday by Antoine Brumel, one of the most celebrated composers of the Renaissance.

Brumel’s Lamentations have been known, performed, and recorded for many years in a much abbreviated form of two verses and the refrain, “Jerusalem, convertere." The additional seventeen verses, which which were found hiding in plain sight in a sixteenth-century manuscript by Musica Secreta’s co-director Laurie Stras, reveal a monumental setting that is both intricate in its detail and imposing in its formal construction; a masterpiece brought from darkness into light.

This complete set of Brumel’s Lamentations was preserved for centuries in a manuscript that was not copied for display, nor for a great noble chapel; it has no illuminations, and virtually no composer ascriptions to lead the curious towards its musical treasures. But its copyist, an obscure friar, was a different kind of master, leaving tiny details in the decorations that leap out at the reader like direct messages from the past. He left another manuscript, copied for a Florentine convent, that is filled with tiny inscriptions and portraits of the nuns, and the music it contains gives us a similar aural portrait of the nuns’ daily life. The second half of the disc brings the music of this second manuscript into focus, with gems by Josquin des Prez and Loyset Compère sitting alongside the anonymous beauty of works that decorated the nuns’ worship throughout the year.

When Professor Laurie Stras, co-director of the early music female vocal ensemble Musica Secreta, came across a collection of settings of Lamentations in Florence's Biblioteca Nazionale, it was not immediately clear that what she had in her hands was the complete score of Antoine Brumel's Lamentations of Jeremiah for Good Friday.

Brumel's Lamentations allude to the Tenebrae (Lat. darkness) services in which verses from the biblical Lamentations of Jeremiah were intoned.  Central to the Tenebrae is the belief that the most forbidding darkness can still be pierced by light. Brumel’s work is akin to a vast painting or tableau vivant telling the tragedy of the destruction of a city as seen through the eyes of Christ on the cross in a way that is both completely personal and at the same time universal.

The symphonic proportions of the five 'acts' totalling approximately forty-five minutes, make the composition both impressive and unique in Renaissance repertoire. The Lamentations have no apparent liturgical function but, are likely to have been composed for performance during Holy Week, when every Christian worshipper would re-live the story of Christ's last days through the Tenebrae liturgy.

For the recording, Musica Secreta have paired Brumel's Lamentations with a collection of vocal music copied by Fra Antonio Moro, the same monk who was responsible for copying the Lamentations.  Compiled for a Florentine nunnery, the Biffoli-Sostegni manuscript belonged to two nuns: Suor Agnoleta Biffoli and Suor Clemenzia Sostegni whose names can be found both on the book binding and embedded in its extensive decorations. The manuscript documents the entire liturgical year of a convent in 76 works of which only nine - including Moro's own Sancta Maria succurre miseris – can be attributed. 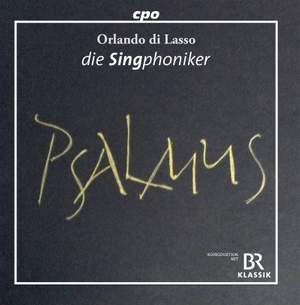 Following the successful CDs Hymnus and Magnificat with music by Orlando di Lasso the Singphoniker are now concluding their Lasso cycle with a recording of his complete Penitential Psalms. It was around 1559 that the Bavarian Duke Albrecht V commissioned a manuscript in which the textual, pictorial, and musical dimensions were to be combined. Orlando di Lasso was assigned the task of setting the seven Penitential Psalms, a group of texts regarded as a unit since ancient times, and rounded off this work with praise of God in the form of a motet on Psalms 148 and 150.  Lasso set the texts verse by verse, in this way drawing on an old liturgical model for Psalm settings. This method means that relatively short textual units produce a self-contained musical whole with component parts of rather limited extent; the musical form, the structure of the composition of an entire psalm, is developed from the design of the text. Just how very much the composer was thinking of the traditional manner of singing is shown in particular by the sixth Penitential Psalm, in which he bases his setting on the monophonic liturgical singing of psalms in the Lydian mode and uses it as a cantus firmus. It is certainly no coincidence that in the nineteenth century the first significant edition of Lassos music was dedicated to the Penitential Psalms: Siegfried Wilhelm Dehn (who, by the way, taught Clara Schumann and Mikhail Glinka) published it in 1838. This is finely crafted and highly impressive music and again and again the Singphoniker amaze us with their sonorous renderings of it.