You are here: Home / Playlists / Christmas Across the Centuries

Some seasonal appropriate music from the middle ages through the renaissance, and then on to Baroque Malta!

VOX NOSTRA is a vocal ensemble based in Berlin, Germany, founded in 1999 by Burkard Wehner. Specialized in the performance of medieval music the main focus of the group is the interpretation of the earliest surviving compositions from the cultural centers of Europe. Sung from manuscripts originating in monasteries, cathedrals, and courts, this music is an acoustical insight into the archaic sound world of the Middle Ages.
The members of VOX NOSTRA have pursued extensive scholarship in the fields of musicology, medieval paleography, and theology. The music of VOX NOSTRA combines expressive musicality and academic curiosity. The repertoire includes Gregorian and pre-Gregorian chant and the specific liturgical music of the different medieval orders like Cistercians, Dominicans, Carthusians and Franciscans dating from the 10th to the 14th century. Furthermore VOX NOSTRA sings early 12th century polyphonic compositions from St. Martial (Aquitaine), compositions from the famous cathedral of Notre-Dame de Paris (starting from 1200), Italian laude of the 13th century, and the richly polyphonic compositions of the Renaissance.
In addition to Early Music, Vox Nostra interprets contemporary music, devised and composed to experimenting with vocal color and microintervals. In both old and contemporary music performances VOX NOSTRA regularly collaborates with lighting designers, and other visual artists, in order to enrich the visual and theatrical aspects of the performance.
A special feature of the ensemble is the practice of singing scores researched from original manuscripts. The musical interpretation made by VOX NOSTRA has specific consequences on the old forms of notation, such as neumatic notation of the chorale, the modal notation of the Notre-Dame organa, and mensural notation. Which each employ a great number of symbols indicating that melodic ornamentation that should be sung. In order to give these features the emphasis they deserve, ensemble VOX NOSTRA favors a slow, flowing style of performance in an appropriately restrained tempo. The vocal sound which results is rich in overtones, and fills the entire space; it allows the archaic and pure intervals of this music to be fully appreciated, and ensures that the complex weaving of the individual voices is clearly audible. In addition to the original manuscripts, research and this interpretation of the music from the 12th-16th centuries also provides new information the regarding tempo, ornamentation and the practice of solo performance of the chants. 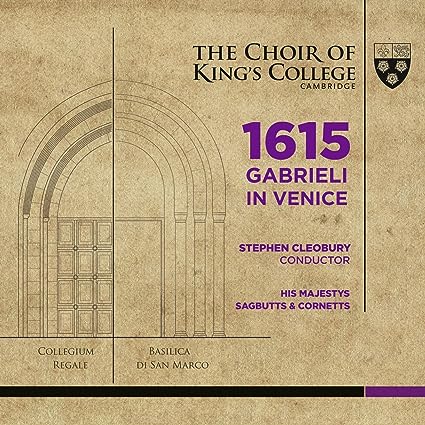 This recording pays homage to one of the most influential musicians of the Venetian Renaissance from within one of the great buildings of the English Renaissance.
Much of Giovanni Gabrieli’s music was composed for grand ceremonial occasions. 2015 marks not just the 400th anniversary of the publication of this collection of works from 1615, but also the 500th anniversary of the completion of King’s College Chapel. The Choir celebrates these anniversaries with the first classical album ever to use Dolby’s new Atmos technology to reproduce the acoustics of the Chapel with unprecedented realism.

As well as being principal organist at St Mark’s Basilica, Gabrieli was a prolific composer of sacred vocal and instrumental music. The early brass ensembles for which Gabrieli composed are no longer to be found performing in St Mark’s Basilica, but this tradition is alive and well in Cambridge: the Choir is joined by His Majestys Sagbutts & Cornetts playing faithful recreations of instruments from Gabrieli’s time.
In ecclesiis (a 14), C78
Canzona Seconda (a 6), C196
Suscipe, clementissime Deus (a 12), C70
Hodie completi sunt dies Pentecostes (a 8), C57
Jubilate Deo omnis terra (a 10), C65
Canzona Terza (a 6), C197
Quem vidistis pastores? (a 14), C77
Sonata XXI, ‘con tre violini’ (a 4), C214
Exultavit cor meum in Domino (a 6), C53
Surrexit Christus (a 11), C66
Canzona Prima (a 5), C195
Litaniae Beatae Mariae Virginis (a 8), C63
Magnificat (a 14), C79

From MusicWeb International: Listeners can be forgiven for not having heard much by Girolamo Abos. Currently, there are only three CDs featuring his music noted in the catalogue. The present disc is the only one dedicated solely to his work. I can find no reviews whatsoever in The Gramophone magazine, nor any ‘hits’ on the MusicWeb International review database - apart from this present CD being noted in the ‘download news’. The three works presented here make an excellent introduction to his work.

A few words about the composer may be of interest. Girolamo Abos was born in Valletta, Malta on 16 November 1715; he was of French descent. Whether he is classified as a ‘Maltese Composer’ is a matter of opinion. Abos was a pupil with Girolamo Ferraro and Francesco Durante at Naples. Between 1742 and 1743 he was assistant to Francesco Feo at the Conservatorio dei Poveri di Gesù Cristo, in that city. He also taught at the Conservatorio di Sant'Onofrio in Capuana and the Conservatorio della Pietà dei Turchini. Amongst his pupils was the Italian composer Giovanni Paisiello (1740-1816).

Girolamo Abos died in Naples in 1760. He was noted for his operatic compositions which were played with varying success across Europe, including London (1756). Abos also held the posts of musical director at a number of churches in Naples, and contributed a fair amount of ecclesiastical music. Grove notes that in his church music Abos ‘followed the example of Durante, striving for a synthesis of the modern style and the traditions of sacred vocal polyphony’. Major works in this genre include his Stabat Mater, a Dixit Dominus and a Salve Regina.

The liner-notes point out that the present ‘Benedictus Dominus Deus Israel’ is one of the few settings of this canticle by Maltese composers, albeit composed in Naples. This eight-movement work is scored for five-part choir (SSATB - soprano, soprano, alto, tenor, and bass) and instrumental group. Although the canticle is used throughout the year at Matins or the Daily Office, this present version exudes the joy and spirit of Christmas. Biblically, the Benedictus is the song of thanksgiving spoken by Zechariah at the circumcision of his son, John the Baptist, who was to be the prophet announcing the Advent of Christ. It is probable that this work, like the following Magnificat was composed during the final decade of Abos’ life.

The delicious Magnificat is well-constructed, making use of cyclic elements as well as dramatic use of word painting. The overall impression of this setting of the Virgin Mary’s hymn of praise is one of joy, love and praise. It would serve equally well as part of the liturgy or as a concert work.

I was captivated by the striking ‘Messa a due cori’ which is scored for double choir of five voices (SSATB), soloists and instrumental ensemble. It is unusual, I guess in having only a Kyrie and Gloria. I wonder if the rest of the mass is missing, or has yet to be edited. The general progress of the music is of alternating choral and solo numbers. I am not sure if this Mass was specifically composed for the Christmas season, yet once again there is a definite ‘festive’ air to this music that would make it an ideal, if somewhat long, accompaniment to the liturgy.

As usual with CPO recordings the liner notes are detailed and informative. They are presented in German and English along with a translation of the original Latin texts. Details of the ensemble and performers are also included. My only complaint is that the font size is tiny, which makes for difficult reading. Unlike, Chandos, Hyperion and Naxos, CPO do not seem to make their inserts available on line.

The music has been realised by Michael Alexander Willens and Dr Frederick Aquilina who edited all three works at the Cathedral Archives in Mdina. The present CD was recorded at a live event given in St Paul’s Pro-Cathedral on 21 January 2015 as a part of the Valletta Baroque Festival. The concert celebrated the tri-centenary of the composer’s birth.

The soloists, choir and instrumental accompaniment give a superb account of all three works. This is definitely a discovery for me - and, possibly for many - that makes an ideal and thoroughly enjoyable Christmas treat.

Each year from 1684 to 1686, Marc-Antoine Charpentier offered a Christmas pastorale to his patron, Marie de Lorraine. After the death of the boy Louis-Joseph, the last male heir of the line, the figure of the Christ-Child occupied a central place in the devotions of the Guise family. The pastorales and antiphons written in this context and recorded here are at the intersection of the sacred and secular genres, of the popular and the learned. They evoke the mystery of birth with a profoundly moving blend of naïveté and gravity.