You are here: Home / Playlists / Christmas in Medieval England

The wonderful Blue Heron Ensemble shares their live performance of English music from the 13th to 15th century.

NOTE: The music on this program came from recent releases for the season. 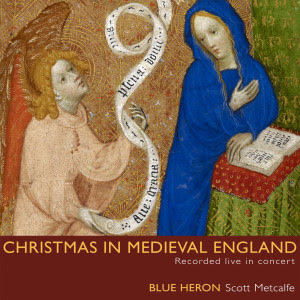 Christmas in Medieval England allows listeners to share the beauty, excitement, intensity and variety found in a Blue Heron concert performance. It includes plainchant, carols, and other music for Advent and Christmas from 15th-century England. It is comprised entirely of tracks recorded live at First Church in Cambridge, Congregational in December 2013. The disc should appeal to fans of Blue Heron’s first disc (BHCD1001), which contained music of 15th-century France (“an extremely impressive recorded debut” ~ F. Weber, Fanfare).

Summer hath his joys, and Winter his delights” – these words, written by Thomas Campion (1567–1620) perfectly describe the attraction of the winter season. Although nature may be in a slumber, we people have found ways to amuse ourselves with long evenings of conversation, accompanied by music and wine, or snuggling up in front of the fireplace with a big mug of a nice, warm beverage, or with physical activities such as skiing or tobogganing. We’ve also invented a large number of holidays that we can look forward to and rely on to bring cheer into this dark and sun-less period.

However, despite all attempts at merriment, it cannot be denied that winter is a cruel and inhospitable time of year and it is often used as a metaphor for a cold heart or unrequited love in ancient ballads.

It is this contrast that makes winter so intense: cold and warmth, companionship and solitude, affection and rejection, darkness and light – and, ultimately, life and death.