You are here: Home / Playlists / Crossing Over

Three discs that cross borders: the new Apollo Fire Appalachia project; the Quadriga Consort with tales of mystery from the British Isles; and Constantinople with the journey of Marco Polo. 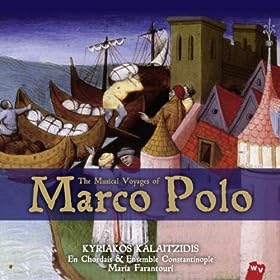 From Rad Bennet:  Marco Polo (1254-1324) is credited with being the first Westerner to have traveled to China and recorded his experiences in a journal, which was widely read. He left his native Venice at the age of 17 with his merchant father and uncle, traveled through the east to China, and returned 24 years later with exotic riches and treasures. Polo himself became a wealthy merchant, but never again traveled to the East.

The idea that Polo must have heard many different types of music during his travels was the basis of the very enjoyable and eclectic The Musical Voyages of Marco Polo. The project was conceived by Kyriakos Kalaitzidis, a Greek musicologist, composer, singer, and oud player who has arranged the music and written much of it. He leads the players of En Chordais & Ensemble Constantinople, a group devoted to Byzantine folk and concert music. On several tracks they’re joined by Maria Farantouri, a famous Greek singer and activist; at one time she performed protest songs with Mikis Theodorakis, perhaps best known to Americans as the composer of the score for the film Z (1969).

The musical styles represented on The Musical Adventures of Marco Polo constitute a musical gazetteer from Venice to China. One composition might sound Chinese, followed by another that sounds Byzantine -- then back home to Italy. Style plays a large part in how the mood changes from track to track, but what really make this disc fun for the audiophile are the arrangements. Mixed in with such familiar Western instruments as the recorder, violin, viola da gamba, and piano are such exotics (to our ears) as the oud, pipa, qanun, setar, tombak, and bendir. The CD booklet includes excellent color photos of the players, each holding his or her principal instrument, to make it easier to put together sight and sound. Those sounds are diverse and delightful, ranging from a single oud to the full ensemble of eight. For once, the label “world music” seems accurate.

From Allmusic.com: The Quadriga Consort specializes in performing arrangements of folk songs from the British isles, and their recordings typically follow a unifying theme, as in the case of 14 Tales of Mystery, the group's 2014 release on Deutsche Harmonia Mundi. This collection of ballads from England, Ireland, and Scotland (with one, MacAfee's Confession, being an Appalachian song), relates tales of murder, revenge, and supernatural visitations. At the center of the album is soprano Elisabeth Kaplan, who sings with a richly lyrical tone that is almost too lovely for the contents of some of the songs, and she softens the grimness of The Holland Handkerchief, The Unquiet Grave, Geordie, and The Rich Old Lady. While the ensemble plays early music instruments, such as viols, recorders, and harpsichord, the arrangements have a distinctly updated feeling, because leader Nikolaus Newerkla has found an intriguing balance between old Baroque period sounds and modern popular rhythms that has considerable appeal for crossover audiences.

From James Mannheim: Cleveland, Ohio, Baroque ensemble Apollo's Fire has a freshness perhaps born of its isolation from the major currents of historical performance, and with its Come to the River album of early American music in 2010 it even achieved a measure of commercial success.Sugarloaf Mountain, they point out, is not a sequel to the earlier release but might be termed a prequel: the material predates the music on Come to the River, investigating American music's Scots and Irish roots. It is very easy for classical groups to become irredeemably cutesy when performing folk material, but that does not occur here. There are three reasons for this. First is that the Baroque instrumental ensemble is a closer cousin to Celtic music than most other classical groups are, and in fact a London audience of the 18th century might well have heard these tunes in something like the arrangements offered here by director and harpsichordist Jeannette Sorrell. Second, Sorrell, who came of age as a musician partly in the rural South, has a way with this music, and she gets the right straightforward tone out of her vocalists and musicians. Finally, Sorrell assembles her traditional materials into the right kind of loose sequence: neither an assortment of unconnected tunes nor an imposed narrative. Instead, she divides the program into categories: after a prologue, "The Mountains of Rhum," come sections entitled "Crossing to the New World," "Dark Mountain Home," "Cornshuck Party," "Love & Loss," "Glory on the Mountain" (a pair of sacred songs), and "Appalachian Home." The overall effect applies song to experiences Irish and Scottish immigrants to Appalachia might indeed have had, without forcing them into an artificial story. The effect is entirely compelling, by turns funny, tragic, and even grisly.

1. The Mountains of Rhùm
2. Farewell to Ireland - Highlander's Farewell
3. We'll Rant and We'll Road (Farewell to the Isles)
4. The Cruel Sister
5. Se fath mo buart ha (The Cause of All My Sorrow) - The Butterfly Barney Brallaghan
6. Nottamun Town
7. Black Is the Color of My True Love's Hair
8. I Wonder as I Wander - The Gravel Walk Over the Isles to America
9. The Fox Went Out on a Chilly Night
10. Oh Susanna! - Pretty Peg - Far From Home
11. Once I had a Sweetheart - Wayfaring Stranger
12. Pretty Betty Martin - Katy Did - Red Rockin' Chair
13. Just Before the Battle, Mother - Go March Along
14. Glory in the Meeting House
15. Oh Mary, Don't You Weep
16. Sugarloaf Mountain