This time, the Odhecaton Ensemble continues their study of the composer’s life with his late years.

NOTE: All of the music on this recording is from the recording Roland de Lassus—Biographie musicale Vol. IV. It features the Odhecaton Ensemble directed by Paolo Da Col and is Musique en Wallonie CD MEW 1471. 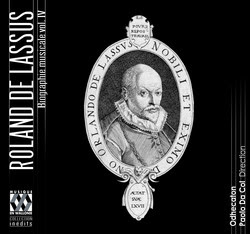 This 4th volume in the series covers the last period of Lassus's prodigious activity, choirmaster of Albert V Duke of Bavaria. It begins with Albert's death in 1579 and thus the crowning of his son William, and ends with the composer's death in 1594. Old age and disease have barely interrupted a long list of masterpieces. This collection is completed by the motet Musica Dei donum optimi (an exception made to the principle of CD-unreleased works of this biography) published the year of Lassus's death, a splendid tribute to the music that governed with such power and variety the whole existence of this great name of the Renaissance.

From Gramophone: This is the fourth instalment in a musical biography of the true Renaissance man among late-Renaissance composers. As with preceding volumes, the anthology covers all the genres in which he worked: Mass, motet, madrigal, German song and of course French chanson. The programme works very well, not least because the choice of works is astute, nearly consistently out of the top drawer. In keeping with the set’s chronological approach, they are drawn from the final 15 years of Lassus’s life. The Missa super Dixit Joseph (never recorded previously as far as I’m aware) is a splendid work, complex and expansive, and the moving Musica Dei donum, which concludes the disc, is a fitting testament. The Italian and German works do not strike me quite so forcibly but the vignette Helas j’ay sans mercy illustrates Lassus’s ability to choose and clothe texts in his mother tongue with infinite discernment and subtlety. A complete recording of his chansons (or at least a substantial survey) is long overdue.
Odhecaton are surer-footed here than in the Gesualdo motet collection anthology I reviewed in November. Their interpretations are confident though not always pitch-perfect, but at their best these are valuable additions to the discography, particularly those of the pieces I’ve named. Lassus enthusiasts will find the booklet irresistible, with illustrations that convey the gloomy texture of the composer’s last years. Particularly poignant is the document of 1594 that lists him among the personnel that the ducal administration had decided to sack for lack of money: the ink was scarcely dry before it was crossed out with the laconic annotation, ‘dead’.