The latest from the young Stile Antico ensemble gives us a Renaissance Christmas from Flanders to Bohemia and on to Germany .

NOTE: All of the music on this program came from the new Stile Antico recording on Harmonia Mundi. It is CD HMU 807575. 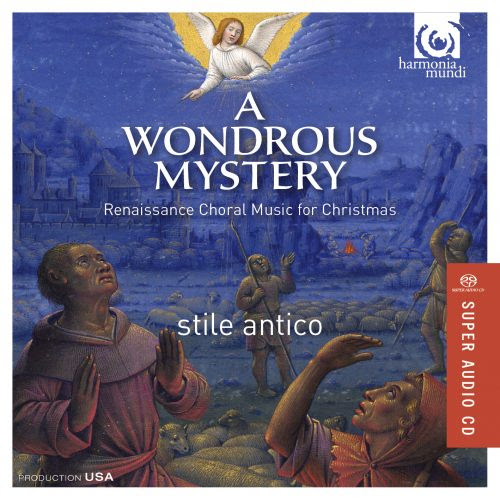 From ClassicsToday.com:In the first couple of decades after the advent of the CD, new and reissued Christmas releases were as plentiful as the stars in a clear winter sky. It seemed that every label, along with every choir, large and small, professional and amateur, was engaged in the effort to plenish this new catalog with both existing and newly recorded programs–dozens and dozens of them–of all of the most popular Christmas repertoire. Most of it consisted of carol arrangements, performed by the big-name British university and cathedral choirs, augmented by contributions from French, German, Canadian, and American groups.

Eventually, a few wise men (and women) answered the question “how many more choral Christmas recordings of the same carols and songs sung by the same choirs do we need every year?” with the reply, “probably not so many”. Once you have your favorite half dozen or so collections from King’s, or Trinity, or Westminster, or Christ Church, or the Cambridge Singers, you’ll most likely be looking for something a little different next year.

Meanwhile, choral ensembles such as the Tallis Scholars, The Sixteen, Theatre of Voices, and Anonymous 4 devoted themselves to satisfying listeners’ receptiveness to the new and unusual with serious, scholarly, and engaging explorations of pre-18th-century repertoire whose themes and texts were definitely “Christmas”, but were for the most part not known or revered as staples of the modern Christmas canon. This was music (often in Latin, old English, and various European languages) that served a purely liturgical function (masses and motets, chants and canticles), or, in the vernacular, a secular, decidedly celebratory purpose, all of it written and sung before the Christmas we know today, of “Deck the hall” and “Silent night”, was invented.

Here, the 12-voice ensemble Stile Antico, which specializes in Renaissance polyphony, continues that tradition, with a consistently entertaining and often enlightening program of mostly late-16th century works by “continental” composers, both Protestant and Roman Catholic, some well-known (Praetorius; Clemens; Hassler) and others infrequently heard (Handl; Eccard). A sort of anchor for the program is Jacobus Clemens’ Missa Pastores quidnam vidistis, whose movements are separated by motets by Handl, Eccard, and Hassler, and a Magnificat by Hieronymus Praetorius.

The opening Ein Kind geborn in Bethlehem by Michael Praetorius (not related to Hieronymus) properly sets the tone, its festive annunciation, sung bright and clear in a dancing triple meter (and with impeccable diction and intonation), tells the story of the birth, the manger, the kings, its meaning for all people of the earth, and ends with a rousing praise “now and evermore!”Later we hear Praetorius’ Es ist ein Ros entsprungen–but between its verses Stile Antico inserts a marvelous canon on the same tune by German composer Melchior Vulpius, a nice touch that happily upsets our expectations and enhances our appreciation of an all-too-familiar piece.

Clemens’ motet on which he bases the Mass is itself a masterful piece of extended polyphony, reminiscent of similarly unfurling, near-cadenceless, cross-relation-spiced creations of Clemens’ contemporary Nicolas Gombert. The Mass may be the program’s “big” work, but Hieronymus Praetorius’ Magnificat is one of the two special highlights, with its well-integrated tribute to the famous tune “In dulci jubilo” and some absolutely sublime singing. The other, perhaps more memorable work, is Jacob Handl’s Mirabile mysterium, whose exotic chromaticism and wild harmonic twists beg comparison to the accepted master of such things, Gesualdo. Where did this come from–and are there any more?

The rest of the disc is filled, if not with such extreme surprises, then certainly with the same standard of superlative ensemble singing and well-chosen music that will make this a favorite recording for all Christmas choral collectors, joining the group’s earlier Puer natus est from 2010, which featured Advent and Christmas works by Tudor composers. You won’t hear finer singing anywhere; and the Praetorius and Handl pieces will guarantee you’ll return to this disc more often than just for the holidays.