The new recording of carols from Queens College, driving the cold winter away with Piffaro, and a sunny Christmas from Baroque Brazil.

I. Drive the Cold Winter Away (Piffaro).

Piffaro captures the joy of a decade of holiday concerts on Drive the Cold Winter Away, a compilation of live performances, released in December 2013 with the help of a wonderful community of supporters including Terry and Cindy Tobias, Deborah Malamud and Neal Plotkin, and Anthony Elitcher and Kathryn Taras.

Artistic directors Joan Kimball and Bob Wiemken have selected the choicest performances of music from 16th and 17th century Germany, England, France and Mexico, all brought to life as only Piffaro can, with its unique combination of Renaissance recorders, sackbuts, bagpipes, dulcians, shawms, lutes, guitars, harp and percussion.

Our thanks go out to all our guests, including Matthew Glandorf, conductor of Choral Arts Philadelphia, and Jordon Sramek, conductor of The Rose Ensemble, for giving us permission to include their performances on this new CD.

Joyous and reflective, sacred and profane, mass movements and dances, some familiar tunes and some new discoveries – this is music that will refresh and delight your ears. 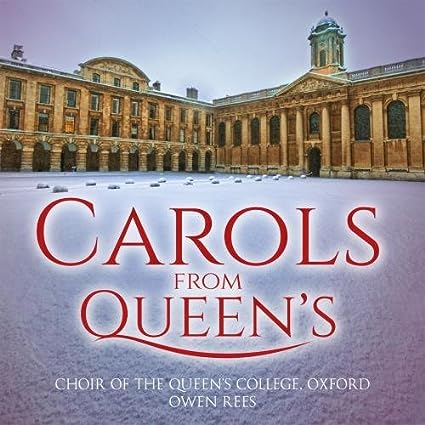 Carols from Queen’s presents the choir in all its luxuriant glory. This Christmas album celebrates the Choir’s illustrious history, and offers some of the most beloved carols from throughout the ages. Several of the composers and arrangers of the popular carols featured on this album had associations with The Queen’s College. This is truly ‘Carols from Queen’s’. The Boar’s Head Carol is the work most strongly associated with the heritage of the College. It originated in the 14th century at Queen’s and has been sung every year since at the Christmas time Boar’s Head Feast in the College Hall. Kenneth Leighton (Lully, lulla, thou little tiny child) and Herbert Howells (A spotless Rose), two prominent 20th-century British composers of sacred choral music, both studied at The Queen’s College. Harold Darke (In the bleak midwinter) and Ivor Atkins (The Three Kings) were both members of Queen’s. Atkins’s ever-popular arrangement of The Three Kings appeared in the much-used anthology Carols for Choirs I, compiled in part by Reginald Jacques, a student at Queen’s who become Organist of the College from 1926 – 1936, and a Fellow. Several best-loved carols from this volume are featured on this album. Rounding out Carols from Queen’s are such popular favorites as O Holy Night, Coventry carol, O Come all Ye Faithful, and many more.

The Queen’s College, Oxford is probably best known in carol singing circles for The Boar’s Head Carol, sung every year as a processional at the start of the centuries-old feast held on the Saturday before Christmas, and known as ‘Gaudy’. But in a delightful mix of well-known and other carols, this CD also reflects other carols and composers connected with The Queen’s College. These include Kenneth Leighton (Lully, lulla, though little tiny child), Herbert Howells (A Spotless Rose, Sing Lullaby), Harold Darke (In the bleak midwinter), Ivor Atkins (The Three Kings), and Reginald Jacques, the latter the compiler (with David Wilcocks) of Carols for Choirs, extracts from which form a key part of this well-chosen programme. Other composers represented include John Tavener (O, do not move, The Lamb), Peter Warlock (Bethlehem Down), and Jonathan Dove (Wellcome, all Wonders in One Sight).

Recorded in the more resonant acoustic of Keeble College Chapel, rather than the smaller Baroque Chapel at the Queen’s College, the 33-strong choir uphold their reputation as one of the finest of the mixed-voice student Oxbridge choirs around. The notes by the choir’s director, Owen Rees, explore the history of the carols that we know today, many of which have comparatively recent histories and roots. 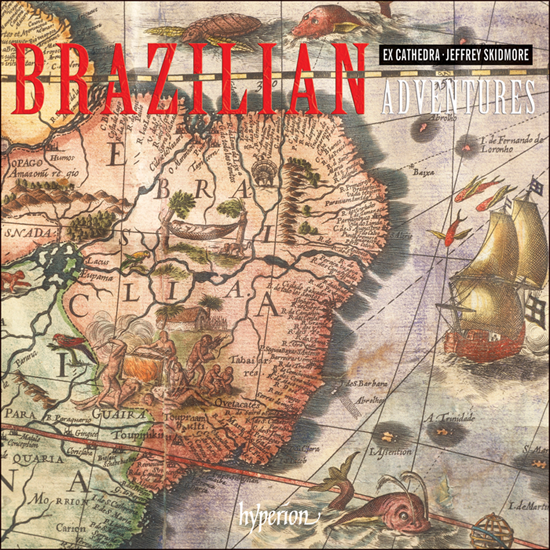 From The Guardian (Four Stars): Ex Cathedra conductor Jeffrey Skidmore has gathered late 17th to early 19th century choral music from five Brazilian cities for this disc, and they make for some really worthwhile discoveries. Most memorable is the Missa Pastoril Para a Noite de Natal by José Mauricio Nunes Garcia, which would have sounded uplifting drifting out from a grand Rio de Janeiro church into a humid Christmas Eve night in 1811. The recurring clarinet theme is something of which Mozart might have been proud. From São Paulo there is the Missa a 8 Vozes e Instrumentos by André da Silva Gomes, with its spirited Gloria and ebullient solo strings. Like everything here, it is sung cleanly and played elegantly by Ex Cathedra. One could almost be in Vienna or Salzburg, but two versions of a vernacular song, all “ai, le, le” refrain and dancing drum accompaniment, remind us that we’re a long, long way away.

From Andrew Benson-Wilson: I vividly remember a concert that Ex Cathedra gave in London about 10 years ago when they performed music by the Bolivian composer Juan de Araujo. At the time, a number of groups had been exploring South American music of the baroque ere, but Ex Cathedra was the only one that really seemed to understand it. One group preceded their concert with a talk by a South American specialist who spoke enthusiastically about the use of percussion instruments, and then proceeded with a concert with no percussion at all! The sensitive and musical use of percussion was one of the many aspects of the music that Ex Cathedra got exactly right. However percussion doesn’t get as much of a look as in their earlier concerts, or related CDs.
A reflection of those earlier Ex Cathedra takes on South American music can be heard on tracks 1 and 22 of this CD, and the delightfully catchy anonymous 17th century villancico: Matais de incêndio, the earliest known example of Brazilian polyphony. It predates the pieces on the rest of the CD by some time, and the shift of style is particularly prominent at the start of the CD, as the first four verses of Matais de incêndio are treated as a prelude segueing into the Kyrie of José Maurício Nunes Garcia’s Missa pastoril para a noite de natal, with its distinctive opening clarinet solo (the first of many). This is one of two complete Mass settings on this CD. It was composed in 1808, and is firmly in the Classical style. Originally for choir and organ, Garcia reworked and orchestrated the piece in 1811 for pairs of violas, cellos, clarinets, bassoons, trumpets, horns, together with timpani and organ. It is gently pastoral in nature, as befits Christmas performance.

The Missa a 8 vozes e instrumentos by André da Silva Gomes is a more flamboyant and dramatic work. Composed in 1785, it reflects a transitional style between Baroque and Classical, with a particularly rousing trumpet-laden Gloria. The rest of the CD is made up of shorter pieces, providing gentler contrast and interpolations to the Mass settings.

Practically all of the 12 singers of Ex Cathedra have challenging solo spots, every one of them producing an excellent sound and a clear understanding of such performance aspects as ornamentation. The chorus is similarly excellent. Jeffrey Skidmore is one of the most inspirational directors around, and his motivation produces extraordinary results. South American music is clearly something of a personal passion, and the programme note reflects his many travels and meetings with musicians there. He states that “The programme is a tribute to the many musicians I met on my travels and to the army of musicologists who are seeking diligently and passionately to bring this music to the world’s attention. They believe it is important and has an urgent relevance if their country is to find its true spiritual and musical soul.” If that is not reason enough to buy this CD, then the inspiring music and outstanding performances certainly should be.