NOTE: All of the music on this program is from the ensemble Les Sacqueboutiers de Toulouse. The wonderful French ensemble takes us on a trip first to Golden Age Spain, then on to the New World, and finally back home for a celebration of Rabelais.

Since their founding in 1976, Les Sacqueboutiers have dedicated themselves to rediscovering the practice of ancient brass and the vast repertoire of the Renaissance , the golden age of their instruments. They have established themselves as one of the most imaginative early music ensembles. The search for musical excellence remains the driving force of their work. Selected as Ensemble of the Year at the Victoires de la Musique Classique 2008 , they collaborated with the most prestigious ensembles to perform repertoires ranging from the Renaissance to Mozart: Hesperion XXI , The Arts Florissants , The Royal Chapel , The Great Stable and the Chambre du Roy, the vocal ensemble Clément Janequin.

The Sacqueboutiers are not limited to the repertoire of the Renaissance. Their creativity leads them to design shows that combine ancient music with other artistic universes : contemporary music, dance, the world of puppetry, jazz, literature, ethnomusicology. 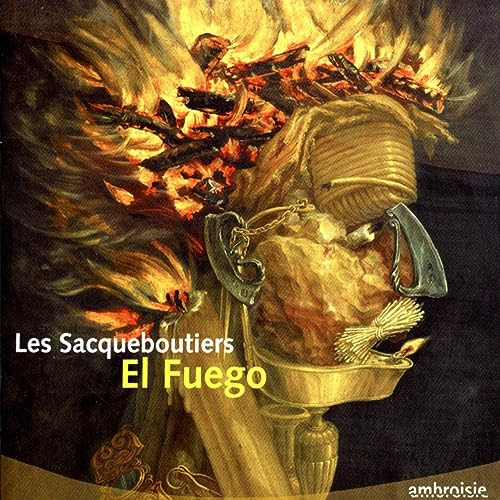 From AllMusic.com:  Les Sacqueboutiers is a group from Toulouse that has an established history in the early music field as a period wind band. While the group maintains a busy concert schedule, mostly in Europe, and maintains an impressive retinue of themed programs, most of its recording activity has been as an element within a larger body, such as supporting William Christie's Les Arts Florissants. Nevertheless, the group has recorded at least five CDs on its own for the Ambroisie label, of which El Fuego is the fifth, and in such settings Les Sacqueboutiers draws around itself such additional instruments as needed for the repertoire involved, in this case an organ, a Baroque guitarist who doubles on vihuela and theorbo, and a vocal quartet. The repertoire is Spanish and centers around the work of middle-Renaissance composer Mateo Flecha "the Elder," who was the master of the ensalada -- yes, it means salad -- a kind of quodlibet that pulled together elements from both court music and popular tunes of his day, usually assembled to serve some pictorial or allegorical purpose. The ensalada did not long outlast Flecha, but Les Sacqueboutiers has discovered some commonality of approach in the Tientos composed by early Spanish Baroque organists Francisco Correa de Arauxo, Juan Vasquez, and Sebastián Aguilera de Heredia. Their works not only help vary the many courses of ensalada offered, but Correa de Arauxo's trope of Cristóbal de Morales' battle piece La batalla becomes part of the main course through the novel manner in which the Tientos is parsed out among the instruments.

The level of inspiration in terms of arranging is slightly inconsistent among the support material; even though these bridging pieces are quite short in most cases, it is in these tracks that the program seems to get a little bogged down. However, the realizations of the works of Flecha are outstanding, palpitating with rhythm, sung with gusto and enthusiasm, and almost operatically varied in terms of instrumental color. This is so well done that one wonders what marvels Les Sacqueboutiers would be able to wring out of madrigal comedies, such as those by Adriano Banchieri. Les Sacqueboutiers' treatment of Flecha's La Justa (The Tournament) is a real standout, with the attention paid to its highly flexible rhythms and use of tastefully handled percussion throughout. La Guerra (The War) is treated as the mother of all battle pieces, with ominous, martial percussion sounding well before the piece begins. La Guerra is such an elaborate and well thought out realization that it almost seems like a mini-opera in itself. While Ambroisie's El Fuego may not be wall-to-wall in its absolute sense, the best of it more than makes up for any momentum lost, and this should well satisfy those who take an interest in the typically salty and spirited popular side of the Renaissance coin. 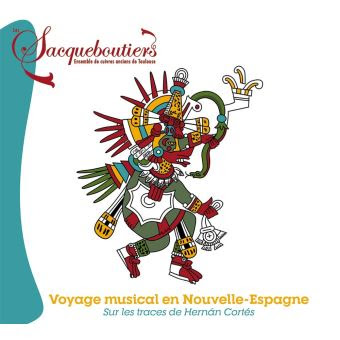 When, at the end of the year 1518, Fernando Cortés leaves Cuba for an exploratory trip to Mexico, he does not know what he is about to encounter: a civilization entirely different from his own, where relations social, artistic productions, religious rites, the very conception of the world are in a spectacular contrast with European schèmes.

to give an account of this "shock of the conquest" the texts found alternate the points of view: sometimes borrowed from conquistadores companions of Cortes, they are also drawn from the Indian chronicles which told the arrival of the Spaniards and the incomprehension which in has resulted.

This encounter between two worlds has also been musical, as evidenced by the program of this concert which features works composed and performed in New Spain in the 16th century and resulting from Mesoamerican interbreeding. This is the case of the pieces of Gaspar Fernandes (v. 1565-1629), a composer of Portuguese origin. We must also note the pièces extracted from the manuscripts of Santa Eulalia. These sources are invaluable testimonies of the daily musical practice of Guatemalan rurality. Despite the great social and geographical distance that separates them from the production of a Gaspar Fernandes cathedral or a Garcia de Zéspedes, these manuscripts show that deep in the mountains of Central America, local musicians created original works which reflect at the same time the lessons of their Spanish masters and a sensitivity rooted in pre-Columbian culture. 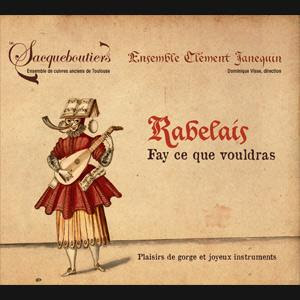 From Early Music Review: For those acquainted with their work, it comes as no surprise that the Ensemble Clément Janequin have had a long association with the works of Rabelais. Their 1994 CD Une fête chez Rabelais was in itself the result of a successful concert programme, and this present CD was also preceded by a series of live performances. Such is the wealth of surviving Renaissance French chansons that the two CDs only have one chanson in common. The Sacqueboutiers, who nowadays have dropped their regional identifier ‘de Toulouse’, provide a forthright accompaniment for many of the numbers and some impressive instrumental numbers, while the singers, led by their distinctive alto/director Dominique Visse, present splendidly characterised performances of the songs.
Over the years the Ensemble have made this area of Renaissance music their specialist realm, and their grainy, robust singing often skirting on the raucous, seems to me just right for the present project. Another major delight of this package is the selection of splendid readings largely from Rabelais’ Gargantua performed by the versatile-voiced Vincent Bouchot. It is unfortunate that the reader’s voice is given such an artificial studio acoustic, contrasting uncomfortably with the ‘live’ acoustic of the music, but Mons. Bouchot’s splendid Renaissance pronunciation carries all before it.
Anglophone listeners will find the lack of translations a disadvantage, although the full texts of songs and readings are provided in French. The otherwise lavish accompanying book has excellent programme notes (in French only) and wonderful illustrations, some of the period (including the wonderful crumhorn-nosed figure on the cover), some designed specially for the publication.
From AllMusic.com: The title of this album, Fay ce que vouldras (Do what thou willst), is taken from the 1532 novel La vie de Gargantua et de Pantagruel by François Rabelais, and the recording features readings from the book interspersed with vocal and instrumental music of the period by composers like Josquin Desprez, Claude Lejeune, Clément Janequin, Orlande de Lassus, and Claudin de Sermisy. This is an album that should be highly entertaining for fans of these composers and anyone who enjoys music that's quirky or sometimes just plain strange. The spoken texts, in Middle French, are delivered with such gusto and panache by Vincent Bouchot that they should engage even listeners who don't understand a word of what is being said. (The CD comes with a gorgeous, lavishly produced book in French that includes no translations.) The performances by the wind ensemble Les Sacqueboutiers and the male vocal group Ensemble Clément Janequin are ebullient and polished. This is rowdy secular music and the performers sound like they are having the time of their lives with its high spirits and occasional loopiness. The music's oddness peaks in the second part of Janequin's chanson, La chasse, in its depiction of a pack of dogs, barking, howling, and yelping. The music itself is riotously unconventional -- Janequin obviously had a wicked sense of humor -- and the singers' very free rendering of the hounds' gnof, gnof, tronc, tronc, plif, plof is hilarious. The sound is immaculate and detailed.
1. Vive le Roy, 01:44
2. Je boys à toy mon compagnon, 02:14
3. Or viens ça mie Perette, 03:54
4. Hau, hau je boys, 03:21
5. O que mesa que manjar ! Quien quiere entrar ?, 06:06
6. Grosse garce noire, 04:45
7. Martin menoit son pourceau au marché, 05:59
8. La nuit froide et sombre, 03:26
9. Je vis, je meurs, 03:33
10. La chasse, 08:58
11. Pavane et Gaillarde " Ferrareze", Courante Tourdion, 06:04
12. La guerre, 03:28
13. La guerre, 07:39
14. Le content est riche en ce monde, 03:09
15. Nous sommes de l'ordre de Saint Babouyn, 04:48