A rarely-recorded mass by Josquin, music for St. Catherine from St. Catherine’s College, Cambridge, and the almost unknown work of Johannes de Cleve. The Choirs of St Catharine’s College, Cambridge, with their director Edward Wickham have collaborated once again for this album of Renaissance motets and hymns in praise of St Catharine – one of the most ubiquitous and beloved saints of the Middle Ages who also lends her name to the college (founded in 1473) where both groups are resident.

With composers as diverse as Palestrina, Jean Mouton and Richard Fawkyner (interspersed with Sarum chant for St Catharine) this programme of choral works spans a century in which the cult of St Catharine was at its height, representing the prayers and exhortations of pious communities towards a saint who might represent their interests in the court of heaven.

How apt that the joint choirs of St. Catharine’s College, Cambridge should produce a CD of music in honour of their patron saint. The pieces chosen on this generously filled disc, are intriguing and mostly not well known covering the period from the late fifteenth century and well into the sixteenth. Some of the leading names are here but also several which are rarely come across like Pierre Vermont.

St. Catharine was a very popular saint in the medieval period up to the Reformation with sixty-two medieval English churches dedicated to her in the middle ages. She is known as St. Catherine of Alexandria and her emblem is the famous Catherine wheel. Her feast day is November 25th. She is thought to have lived in the 4th Century.

The disc comes with an essay ‘The Story and Cult of St. Katherine’ by Miranda Griffin, and another essay ‘A note on the music’ by conductor Edward Wickham and all of the texts, well translated. Incidentally the spelling of Catharine, Catherine or Katherine seems to be interchangeable. The college was founded in 1473 by Robert Woodlark as ‘Katherine Hall’ but the present, unusual spelling appeared from only 1860. The saint is, amongst other things the patron saint of scholars and also unmarried women, so she was well chosen. The plainchant and to some extent the motets tell something of her life and importance and were inspired by her entry in ‘The Golden Legend’ a vast tome by Jacobus de Voragine compiled c.1260.

Edward Wickham of course is no stranger to this early repertoire; you will know his recordings with The Clerks’ Group of composers like Ockeghem. Some of those CDs date back to his younger days, in the early 90’s but in 2003 he was able to devote his attentions more to choral training and to the choirs at St. Catherine’s. The SATB choir is long established but the Girls’ choir, the first in a Cambridge college was not founded until 2008.

An especially nice touch is that several of the motets are preceded by a brief verse of a plainchant on which the motet is based and this chant is generally sung by the girl’s voices with almost no break into the polyphony. Some chants are well known elsewhere, so for example Senfl's Ave Katherina martir uses the ‘Ave Maris Stella’ melody and the anonymous (I feel late 15th Century) Katherinae collaudemus/Fulta fide Katherina uses the ‘Pange lingua’ plainsong.

It’s probably an obvious comment but the sound quality is fresh, open and well balanced and the voices lack obtrusive vibrato. Sometimes, in the lower voices especially, the tone can be unfocused but there are few problems with tuning. In other words they are a typical, high quality college choir, well drilled and clear in diction and precise with vowels.

Which pieces stand out? It has to be first the vast motet from the Eton Choirbook Gaude rose sine spina by Fawkyner (given here as Richard but some sources say John). I wonder if Edward Wickham first came across this magnificent work on an LP back in the late 60’s on the Argo label, as I did, performed by the much lamented, now no more, Choir of All Saint’s Margaret Street. That was performed with boys on the top line of course. This performance is vigorous and full of the passion of youth. In truth the tempo is quite quick, indeed they take over a minute off the recording by The Choir of Christchurch Cathedral, Oxford on Avie made in 2009 and as a consequence some of the rhythmic detail, especially in the lower parts, is not always clear. Nevertheless I left this performance feeling uplifted and impressed by the ambition of the choir and their virtuosity.

Any music by Nicolas Gombert is worth hearing. His canonic Virgo sancta Katherina is for the girls' voices only, divided I think into four parts and is a most delicious piece, deliciously performed. As is the brief motet by Willaert O gemma clarissima the text of which not only gives the CD its name but also sums up the whole project ‘O brightest of jewels/Catharine most holy virgin/Most elegant lily/And mirror of women;/We pray that by your merits/ We may delight in the joys of heaven’.

The booklet cover is adorned with part of a painting of St. Catharine, now to be seen in Madrid, by the great Caravaggio. 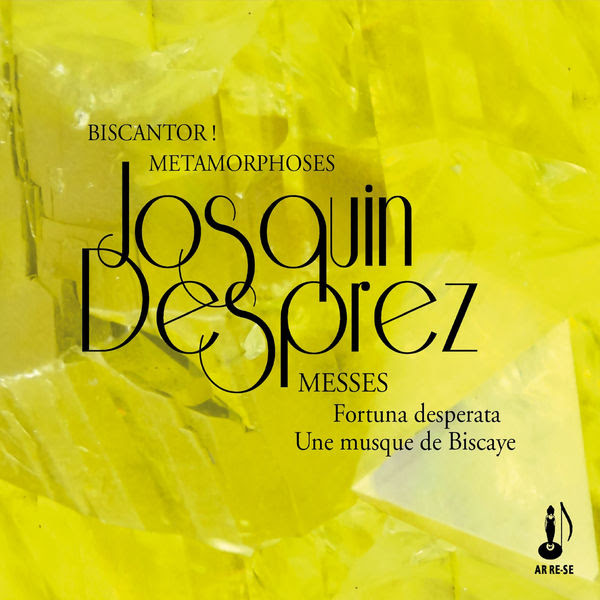 The Fortuna Desperata and Une Musque de Biscaye masses are included in this seventh volume of the complete masses by Josquin Desprez, entitled "Josquin and Spain" from French vocal ensemble Metamorphoses et Biscantor, under the baton of Maurice Bourbon. These considerable works, each more than 33 minutes long, are masterfully written and were composed when Josquin was at the height of his compositional powers.

Maurice Bourbon took part in analysing and executing the works, as he has done since the project's inception, but chose for this recording to hand the job of conducting the choirs over to the young Juliette de Massy, who led Biscantor! (6 young singers including an alto, an haute-contre, three tenors, and a bass) and Metamorphoses (3 confirmed singers: a soprano, a countertenor, and a bass). These combined forces enabled the performers to recreate a variety of tessitura, to bring out certain themes, and to ensure that breathing would not interrupt long notes. The Missa Fortuna desperata is based on the 3-voice song of the same name, and is attributed to Antoine Busnois, one of Josquin's contemporaries.

Josquin shows his compositional prowess in this work, playing with the three voices of the song, using them one after another as a Cantus firmus (a melodic subject). Long note values are often used for these voices, which act as a veritable framework for the work. What a masterful Credo! What a magnificent Agnus Dei!! The skill involved in writing them and the splendid results are similar to those of the Missa l'Homme armé Sexti toni (see Josquin and Rome 1, the third volume of the complete masses).

Along with recreating Josquin's geometrical interplay, in certain movements Juliette de Massy also brings out a stretching out or suspension of time, which reinforces the spiritual and aesthetic qualities of the work. The Missa Une musque de Biscaye is based on an anonymous popular song of the same name; its title refers to a young lady from the Basque Country. The song's themes are used in the Superius and Tenor parts, as well as in the Cantus firmus, where they are heard in long note values and are sometimes sung retrograde, like in the Credo. Josquin must have been charmed by the song's melodic and rhythmic potential, and the way his bubbling sense of invention could transform it. Maurice Bourbon and Juliette de Massy felt from the outset that the song's light-hearted quality gave the mass a lively and almost playful character. While this is certainly true in some passages, others are striking for their power and lyricism. In this recording Juliette de Massy highlights the superb vocal lines, enhanced by a sort of fantasy springing both from the song itself and from the variations and diminutions Josquin penned. 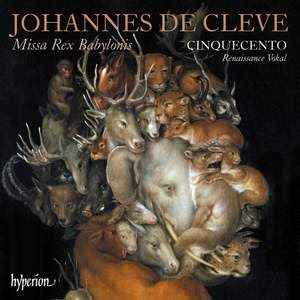 Cleve took Vaet’s motet Rex Babylonis as the musical model for his Missa Rex Babylonis, a setting of the Mass Ordinary—that is, those parts of the Mass that remain the same regardless of liturgical season. This technique, dubbed ‘parody’, involves the use of distinctive musical material from one piece (often a motet or secular song) as the basis for a Mass setting. This contrasts with the cantus firmus technique favoured by composers of an earlier generation, in which pre-existing melodic material, often derived from chant, is stretched out into long notes that serve as the structural foundations of the counterpoint.
It is not certain where Johannes de Cleve (1528/9–1582) was born (Cleves?) or trained (Low Countries?), but his first published compositions were printed in Antwerp in 1553. The same year, he was appointed as a tenor in the chapel of Ferdinand I in Vienna. In 1559/60 he undertook a journey to the Low Countries to recruit further singers for the imperial chapel. He sought to strengthen his profile at court by dedicating two collections of motets to Ferdinand in 1559. After the emperor’s death in 1564, Cleve found a position in the chapel of Ferdinand’s youngest son, Archduke Karl (Charles), whose court was at Graz. In 1570 he petitioned leave from his duties because of physical incapacity; Karl granted him an annual pension of 200 florins on the condition that he continue to supply the chapel with new compositions. Cleve moved first to Vienna, and then settled in Augsburg, where his collection Cantiones seu harmoniae sacrae was printed in 1579. In the dedication of this publication to Archduke Karl, Cleve recalled his long service to the Habsburgs, who had always been great patrons of music. The collection contains several ‘state motets’, such as epitaphs on the deaths of Ferdinand I, Maximilian II and Karl Friedrich of Jülich-Cleves-Berg, and pieces dedicated to Rudolf II and Archduke Karl. In total, Cleve’s published collections contain no fewer than thirteen pieces in honour of the Habsburg dynasty.

Parody technique was not simply a mechanical process of cut-and-paste, but involved the creative re-interpretation of the model. For example, Vaet’s motet begins with a distinctive upwards leap of a minor sixth in the superius, imitated soon after by the tenor an octave lower; however, the other voices begin with a rising fifth. Cleve’s art is seen in the way he unpicks and re-stitches Vaet’s material. For instance, at the start of the Gloria, the conspicuous rising minor sixth returns as the head motif in all voices except the bass, which alone keeps the rising fifth. Cleve also spaces out the entries a little, which produces a slightly more open texture. The recurrence of musical materials from the model, treated in a variety of ways, lends the parody Mass large-scale thematic unity.