You are here: Home / Playlists / Requiem for Josquin

The ensemble Cinquecento has a wonderful recent release looking at Josquin and the generation he taught and influenced. 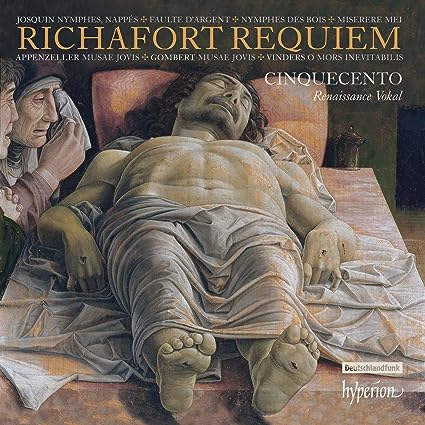 NOTE: All of the music on this program is from the recording Richafort Requiem featuring the ensemble Cinquecento. It is on the Hyperion label and is CD CDA67959. For more information on this group: www.ensemblecinquecento.com

This release presents music associated with the Renaissance master Josquin Des Prez, a composer who towers above all others in the first part of the sixteenth century. Numerous works were attributed to him that have now been proven to be by his contemporaries and successors, including the central work on this recording, Jean Richafort’s expansive and beautiful Requiem. It is performed with affecting clarity by the all-male vocal group Cinquecento, whose many previous discs of Renaissance repertoire for Hyperion have garnered the highest critical praise.

Booklet notes by Stephen Rice, an acknowledged authority on this repertoire, place the music in its historical context and unpick the mysteries of its composition.

Sublime inspiration from start to finish.

Highly impressed by everything vocal ensemble Cinquecento has done on the Hyperion label, including their marvellous disc of Jacob Regnart, I pounced on this title, A Requiem for Josquin with indecent alacrity.

The association with Renaissance master Josquin Des Prez is the legacy of a fame which meant that numerous works by his contemporaries were falsely attributed to him, and this includes the main work in this programme, Jean Richafort’s marvellous Requiem. Richafort was reportedly one of Josquin’s pupils, but this is now thought to be more like the artistic term of ‘in the school of’ rather than his having been an actual student. Richafort did use material by Josquin in other works so the connection is not an idle one, but the Missa pro defunctis is full of new compositional elements and combinations of various genres which put the work, one of the most extended of its type for the period, into a class of its own. Preceded by two authentic and suitably mournful works by Josquin, the scale of the Requiem is felt from the outset, with broad lines and a sense of spaciousness which promises and delivers a timeless span from which to draw meditations of mortality.

Texts and translations are given for all of the pieces here. Stephen Rice’s authoritative booklet notes are a valuable resource when it comes to placing the music in its historical context and delving further into the complexities of its creation, but the expressive warmth and sonority of Cinquecento’s voices, superbly recorded, are the source to which you will want to return for more and more. Superbly unified, the dynamic shading which brings forth leading voice lines and gently points to significant harmonic shifts are done so naturally that the music seems to enter your soul though some kind of osmosis rather than something so banal as mere listening.

The programme has been imaginatively put together, framing the Requiem with pieces by Josquin himself as a kind of reference, the most substantial of these being the sublime Miserere mei, Deus. Like knowledge and respect for nature, we seem to have lost the art of being able to make such things for ourselves these days, though such a performance makes you want to grab some manuscript paper and try. Nicholas Gombert is a name we’ve come across before, and the Musae Jovis is another marvel with some stunning harmonic twists. You can be excused for not having heard of Jheronimus Vinders, who can apparently only be traced as being briefly employed in Ghent from 1525-6. His seven part O mors inevitabilis is a fittingly expansive conclusion to this superb set of laments.

Anyone already in the know about Cinquecento will already have their favourite chair and slippers reserved for an evening with this CD, and a movingly inspiring time will be had by all of these lucky people. For the yet uninitiated this is as good a place to start, and with the juice of Josquin running through from start to finish you can hardly go wrong. If you buy no other music from the 16th century this year, this will at least keep your speakers warm all winter.

The title of ‘post-Josquin generation’ has been
applied over the years to many composers active
in Northern France and the Low Countries; this
description arises partly from Josquin’s in&Mac223;uence and fame,
both of which were immense in his last years and the half-
century following his death, and partly from modern
misunderstandings of composers’ true historical positions.
Since Josquin is no longer thought to have been born as
early as 1440, as had been widely believed for many years,
but more probably in the early to mid-1450s, it no longer
makes sense (for example) to dub the Frenchman Jean
Mouton, himself a ‘50s child’ and who outlived Josquin by
only a year, as a member of the subsequent cohort of Low
Countries musicians. Nor in reality do composers such
as Jacobus Clemens non Papa, Thomas Crecquillon, or
Cipriano de Rore, all of whom were below the age of ten
when Josquin died in 1521, belong to the next, but rather
the next but one, generation. The title is most appropriately
bestowed, therefore, on those born in the last quarter of
the &Mac222;fteenth century, which is to say during Josquin’s adult
career but before he acquired the legendary status that
hassurrounded, but also occluded, his picture since about
1500. These are the musicians on whose creative lives as
performers and composers Josquin had the most decisive
impact; and not surprisingly these are the musicians who
wished to memorialize their colleague.